We’ve all heard of the “Georgetown Stereotype.” I’m not so sure there’s only one. I present to you some of the many characters of Georgetown:

The SWUG (Senior Washed-Up Girl) In Training:
No stranger to The Tombs, she can recite the nightly specials by heart. Does she even know that the 99 Days Club is only for seniors? Evidently not. While apathetic to dressing up and personal hygiene, she’s taken up a new interest in wine tasting (which she does on her Village A couch). This girl reminds us that you don’t have to be a senior to be a SWUG.

The Girl Who’s Never NSOver It:
A double legacy, Jane Hoya eats, sleeps, and breaths Georgetown. Don’t be surprised to see a “1789” tattoo on her side. When you go to her pregame, expect to play icebreaker drinking games ~but only if you’re over 21 and in a building which permits alcohol consumption~. She’ll surely facilitate healthy dialogue, reminding you that not all Hoyas drink, and that those who do, do so responsibly. If you get lucky, she’ll even show you how she NSOs.

The Startup Guru:
After securing a modest 50k from family and friends, he dropped out of Georgetown to pursue his startup. He swears he’s going to be a billionaire by 25 and land a spot on Forbes’ “30 Under 30.” What does his startup do? No one really knows. He’ll probably be back next semester. 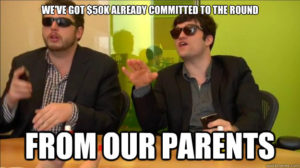 The MSBro:
President of SigEp, working in finance, he’ll say he didn’t even buy the textbook and then skew the class curve by getting a 100. This guy must secretly hit up Lau when no one’s around. But you just saw him at Chi-Di last night, and at Tombs the night before. Work hard play hard, right?

The Facebook Activist:
Having watched “Veducated” on Netflix, she’s a dedicated vegan of two weeks and determined to spread awareness about her cause. Apparently sharing socially-oriented articles constitutes real activism these days. She’ll send you multiple invites to local protests, which she probably doesn’t attend. This obsession will last for a month until she watches “Blackfish” and becomes determined to save Seaworld’s marine mammals from her MacBook Air. 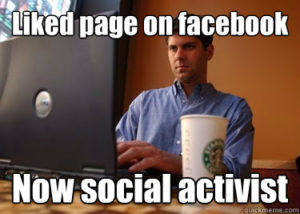 The Pre-President:
He introduces himself as future “President of the United States” as he aggressively shakes your hand with a wide smile. When he enters a room, he nods and points into the distance, acknowledging his many friends, and then waves in the opposite direction. Sometimes you wonder if he is even waving at anyone or just wants to keep up appearances.

The (Practically) Engaged Couple:
Liz and Ben have been dating ever since they met the during the first day of their pre-orientation program. Still going strong, they’ve reserved a spot for their wedding at Dahlgren Chapel (because you HAVE to do so years in advance). Last week, they posted the cutest couple photos at the Cherry Blossoms and hold hands whenever they walk around campus. They are going to be together forever and ever, and ever, and ev… wait. Ben just DFMOed with Sarah at ChiDi when Liz was at an internship interview in New York? Yeah, I take back what I said. Oh well. #Younglove