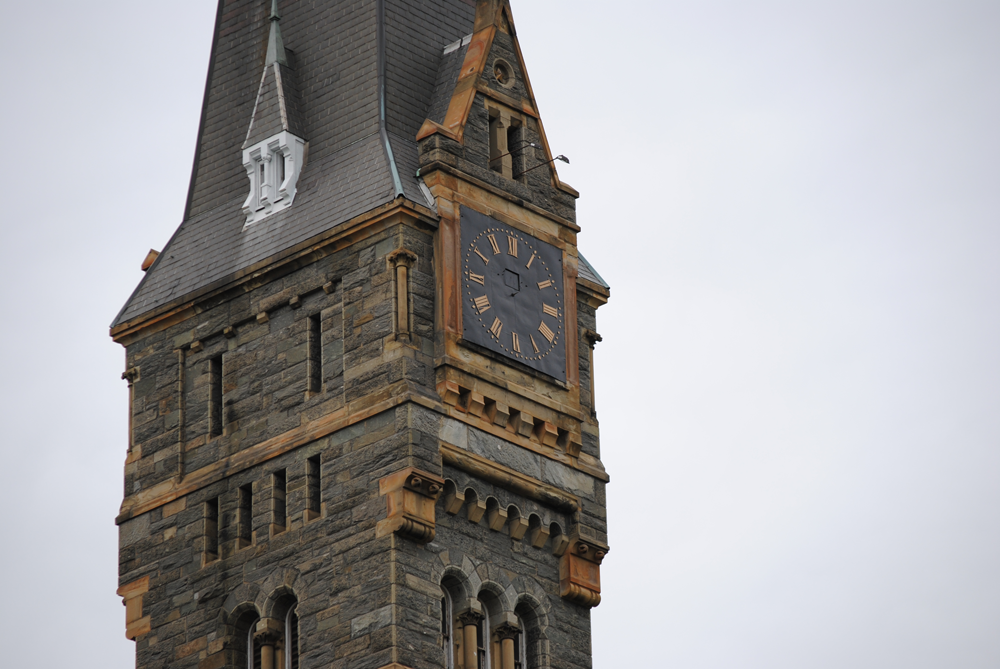 For the first time in years (since 2005 to be exact), the hands have been stolen from Healy Tower. For those not familiar with the tradition, Wikipedia has a helpful summary:

Historically, students would steal the hands and mail them to the Vatican, where they are supposed to be simply stamped ‘return to sender’ and returned to the university. One such incident caused significant damage to the clock mechanism, however, and security has been increased as a result in recent years, decreasing the incidence of the theft. These measures have not prevented students from successfully obtaining the hands however, as they are captured every five to six years.

But the big question remains – who’s responsible for today’s shenanigans? While DPS investigates the situation, we’ve rounded up the usual suspects to see who might have the best motivation to scale the tower.

WGTB They were  the first to report that the clock hands had been stolen, beating both The Hoya the the Voice to the punch. In an effort to earn the recognition they deserve as a campus media outlet, perhaps some rogue WGTB members nabbed the hands and went straight to Twitter.

The Voice Or maybe it was another campus media group – our friendly rivals over at Vox Populi are acting like they don’t know the thieves’ identities, but that could all be a ruse.  Hey Vox, we’ve got our investigative journalism pants on too (they’re a little snug).

DPS Breaking up dorm parties and enforcing GOCard checks in Lau doesn’t make for the most exciting life. They hold the keys to all the buildings on campus, and nobody would question them heading into Healy at odd hours of the night. Who’s to say that DPS didn’t do this themselves to liven up finals season?

The Corp Not ones to shy away from big marketing ploys (I heard something about free slushies? for life??), the Corp could be behind this. We’re just waiting to see what goes up in place of the regular hands – Corp storage boxes? T-Shirts? Slushie machine?

The Tombs Not content to decorate their walls with rowing paraphernalia alone, a few brave Tombs waiters pulled themselves up by their bow ties to grab the hands off of Healy Tower.

Class of 2012 Our most likely culprits. If it’s true, they’re going out in a blaze of glory before graduation that we can only aspire to match. Come forward, brave souls! We would love to shake your hands (and add your names to the Wikipedia page for Healy Hall).

6 Replies to “Who Stole the Hands from Healy Clock Tower?”