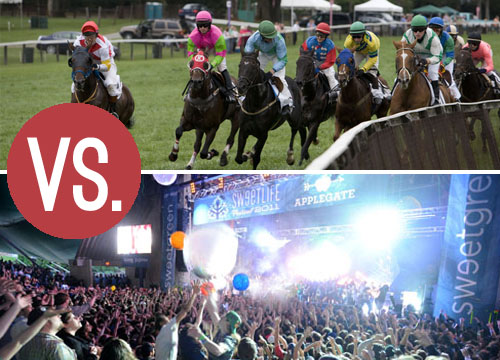 This weekend is sort of like a choose-your-own-adventure book (remember those?). It starts with a fabulous introduction, in the form of all-out Georgetown Day celebration and the second part is up to you. Will  it  be delightfully preptastic Foxfields or chill times at Sweeetlife?

At this point in the week, you’ve probably already made your decision and that’s the first con against Foxfields.  You can’t just spontaneously decide the morning off that you’d like to engage in a day of garden party style debauchery. Everyone wants to party with a hat on but getting to this Charlottesville shindig requires weeks of preparation.

And let’s be honest, the bus ride is the most important part of the trip so if you’re not with a good group of your friends, it’ll be much less of a fun time.

But the whole premise of Foxfields is still genius. It’s a champagne brunch on wheels to a racetrack full of people all in the same mindset.  I think it’s pretty hard to go wrong with that recipe.

There are a few pitfalls, namely burning out too early. When I went many fellow Foxfieldians decided to take spontaneous naps on the grass. Sounds like a perfectly understandable idea. However, roaming cops literally scooped up these unsuspecting nappers and carted them to a “drunk tank” somewhere.

And the biggest issue with Foxfields is the distance. By the ride back, all you want to do is sleep. And sleep you can, but it’s a long, winding road back to Georgetown and you might be that unlucky person who gets stuck next to a non-stop chatter.

I preface this summary with the asterisk that I have not attended Sweet Life so this is all speculation. But let’s be real: this concert sounds amazing.

Those smart people at Sweetgreen obviously have killer ideas, they INVENTED SWEETFLOW and the SweetFlow MOBILE, but they also appear to have well-rounded taste in music. As a big fan of The Shins ( I like them in spite of the pretentious connection to Natalie Portman’s character in Garden State) I have to say that would be a big draw for me. But Avicii! And Kid Cudi! And A$AP Rocky!  Even their Treehouse Stage has a good lineup.

And of course, they don’t let you down with the nom options. Sweetgreen salads, Shake Shack and  Baked + Wired all made the list, plus a host of other delicious sounding options ( I’ve never heard of Luke’s Lobsters but YES. And Snikiddy Snacks? Sounds made up AND delicious).

You can feel a little good about yourself since the whole concert features “sustainable” eating according to the website but I’m a little doubtful of the description “party with a purpose” that they throw around on the website since that sounds a tad pretentious. At least they’re trying.

Two potential issues are the lack of accessibility and the crowds. I know that this place will be a zoo so if you’re kind of agoraphobic like myself you’ll end up feeling kind of sweaty and confused and all of a sudden you’ll be all sticky from the Sweetflow and then someone will step on you while Avicii is blaring, accidentally spilling a bottle of beer (organic, naturally) on you and… you get the idea.

On top of that, they suggest you Zipcar or “rock and roll bus” to the event. Both kind of sound like a hassle. What bus line goes up there? Come on WMATA!

AND THE WINNER IS…

Either way, you’ll have an awesome weekend. You can’t make a wrong choice. And if crowds and party hassles get you down, just visit your zen spot and imagine Jack Jr. frolicking on the front lawn.  Happy Georgetown Day Weekend , everybody!