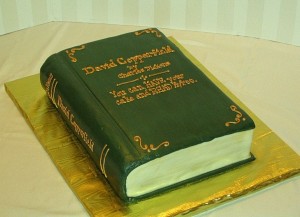 To celebrate Charles Dickens’ 200th birthday, there was a little shindig on the 5th floor of Lauinger Library earlier today. For someone who has a contentious relationship with the author in question, it was not the most riveting, but it did have a post-event Victorian themed snack selection. Also, there was an open bar featuring several wines and a traditional English punch.

They served a tasty Welsh Rarebit (think cheese dip with a hint of tangy beer) and a buttermilk cake. The menu also had some cringeworthy names – “A Tale of Traditional Tea Sandwiches”? “creamy Hard Times Herbed Dip”?

Best moment of the event? A certain professor admitted in a speech that during her college year she and her classmates had referred to A Tale of Two Cities as A Sale of Two T******!