“I think there is a hunger and a thirst for answers to these questions about women and leadership and solving what is a problem. There are not enough women in leadership.” –Norah O’Donnell (COL ’95, GRD ’03)

Georgetown University Women in Leadership’s inaugural summit has been one of the most highly anticipated events of the semester. Students, both female and male, waited anxiously for tickets to go on sale in late February. Within 24 hours of the Eventbrite going live, every ticket to the summit had been snatched up and the event’s Facebook page became a frenzy of people looking to score a ticket from those lucky enough to get in on the action early. The anxious attendees were finally satisfied at 8:45 a.m. this past Saturday when orange, pink and purple adorned a packed Lohrfink Auditorium and the crowd became silent, awaiting the first panel of speakers.

If you didn’t have the chance to take part in the summit or you want to relive the experience you had this weekend, we’ve got you covered. After spending all day at the event, we’ve tried to narrow down all of the great moments into a top 10 list that will knock your socks off.

The 10 Best Parts of the OWN IT Summit 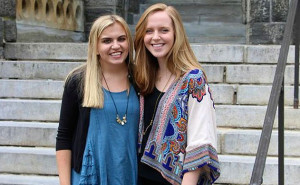 Helen Brosnan (COL ’16) and Kendall Ciesemier (COL ’15) were the co-chairs of the OWN IT Summit, and oh they OWNed IT! From delivering killer intros to being fangirled by many of the distinguished speakers, these two absolutely ran the show and did it well. Throughout the day, Brosnan and Ciesemier – and the entire Summit Team – orchestrated the behind the scenes logistics while making it a point to engage the summit attendees whenever they could. I wonder what they’ll come up with for OWN IT 2015!

When sitting in on the panels, it was hard not to notice the abundance of women who have previously called the Hilltop their home. Maria Shriver (CAS ’77), Kara Swisher (SFS ’84), Norah O’Donnell (COL ’95) and many more made their way back to the Hilltop to address the summit attendees. It was great to see how excited the women were to be back on campus!

They did tech, and they did it big. Upon registering, the smart phone-equipped (read: EVERYONE) downloaded the Usher Id App to check in to the panels and experiential sessions of the day. Attendees were also able to share contact information over Bluetooth with the app. In addition to the mobile app, each breakout room had projector screens filled with stats and graphs about the attendees throughout the day. Those who attended the event made thousands of connections via the app and took advantage of all of the technology available.

If you don’t know Azure Antoinette, OPEN A NEW WINDOW AND GOOGLE HER AS FAST AS YOU CAN. Every second you wait is just one second more you don’t get to experience this brilliant and hilarious poet. To kick off the summit, Antoinette performed a poem specifically written for the OWN IT Summit. She brought the house down. Not only did she deliver a stunning performance, but I think she befriended nearly everyone at the summit! 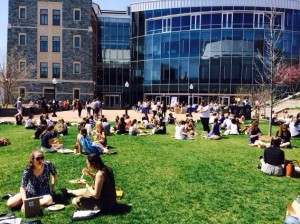 At Georgetown, it’s expected that events provide food options that are average at best. NOT THIS ONE! The quality of the food was right in line with the rest of the event: extraordinary. Attendees had access to complimentary crepes, cupcakes, ice cream and snacks from tech-driven vending machines. At lunch, everyone was given delicious Jetties sandwiches. Not to mention, everyone got to enjoy it all on the lawn on a beautiful spring day.

Some of the biggest names in the biggest industries took the stage in Lohrfink Auditorium to speak about their personal and professional experiences, covering subjects ranging from business to media to technology. Panelists spoke on advancing women in leadership positions within their field. The panels sparked conversations that inspired the audience with every word. They also provided PRIME Instagram opportunities.

#ownit2014. It seemed like the OWN IT Summit took over social media for a few hours on Saturday. And in many ways it did. Filtered snapshots of the MSB, perfectly-cropped close ups of Maria Shriver (CAS ’77) and angled selfies with Judy Smith were strewn across our news feeds, all accompanied by the #ownit2014 hashtag. On Saturday, #ownit2014 was the number one trending hashtag in Washington, D.C.!

Every summit attendee left the MSB at 5 p.m. with a complimentary GUWIL bag in hand. The bags were filled with information about the summit, plus deals from local stores and restaurants. I’ve already started planning my buy one get one free burrito bowl Chipotle visit.

I know. I doubted it too. I mean, the office hours I go to usually leave me with more confusion than before. These were a little different. Attendees met with some of the most accomplished women in their respective fields in groups of 6 to 12 and got to have personal conversations with their heroes.

The real Olivia Pope was there. Need I say more?