In just a few days, most Hoyas will be returning to The Hilltop. A select few will study abroad in the fall, but nevertheless anticipation has never been higher. But amid all the excitement and preparations to return to school, some may have noticed the blossoming of a new trend over the summer that could have serious effects on our futures: the combination of transportation apps (e.g. Uber and Lyft) and food delivery.

Uber Technologies originally unveiled UberEATS in 2014, but the service is still separate from the app that you use to transport your lazy body home from a night out. Food delivery apps quickly became a new fad; Postmates and Tapingo quickly followed and the industry boomed. Even more recently, Uber seems to have taken a step further with the ability to request an ice cream truck. I received this email recently and while the service was only available on August 11, I was still shocked to see how Uber continues to improve its services. 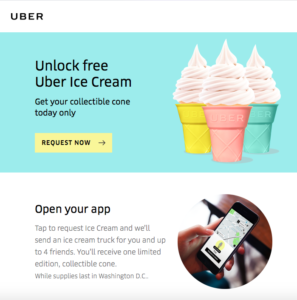 The email continued to describe an added benefit to requesting a personal ice cream truck. As if the idea of that wasn’t enough, Uber promised free ice cream at McDonald’s (every Friday until 9/22/17) when you brought your ~collectible cone~.

So now when you download Uber, you’re not just getting a car service. Instead, you’re exposed to a world of ice cream on-demand and free ice cream at McDonald’s.  While I am not a huge McDonald’s fan (unless it’s Shamrock Shake season), I can’t deny that I was impressed. But just when I thought it could not get any better, I received word that Lyft was developing something called “Taco Mode”: a service that delivers passengers to the nearest Taco Bell mid-ride. Instead of matching its rival’s ice cream service and partnering with McDonald’s, Lyft has raised the bar even higher by partnering with Taco Bell and bringing customers to a food source on their way home. This means that on your way home from the bar (or wherever you are in the middle of the night), you can easily make a pit stop at Taco Bell and satisfy your dietary needs. Has science gone too far?

The correct answer to that question is: NO! This is exactly what the people (read: we, students of Georgetown) need in our lives. A service that allows us to stop for food on our way home makes life incredibly easier. Rather than taking two Uber/Lyft rides to stop for food and then continue back to campus, this idea saves time and money for students who are on a budget.

As the industry continues to change, one cannot help but wonder what services will be released in the future. In order to help some aspiring business leaders, here are some great suggestions that one could take into account when developing the next great food service:

While these suggestions may seem a bit ridiculous, are they any worse than “Taco Mode” or Uber ice cream trucks? That’s up to you to decide, but just remember that in the coming weeks there probably will be a longer wait for late-night Epi than a mid-day Cosi due to something called NSO. In case you have forgotten, the counter at Epi will look something like this.

So to whomever takes up one of these ideas and actually does something with it: please remember me when you’re famous!