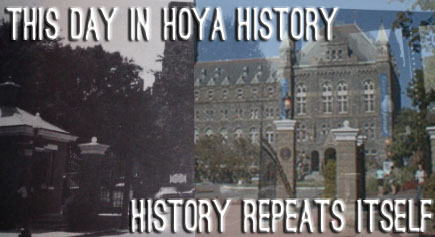 Though it might be a bit late to say this, I’m still going to: Welcome (back) to the Hilltop, Hoyas! Quite a bit has occurred during our summer absence, and as we enter into a brand new school year, it seems like the Hilltop is in flux. Many changes are underway, and Georgetown as we know it is continually growing and improving… just like it was in 1970.

Believe it or not, September 6, 1970 bears a lot of uncanny similarities to the occurrences that are happening on the Hilltop today. There was triumph, controversy and, perhaps most importantly, the beginnings of New Student Orientation (NSO)! Take a look below at the eerie resemblance between 1970 and today:

Feeling a weird deja vu with 1970, yet? Tell us about it in the comments. In the meantime, enjoy the beginning of the year and stay tuned for our next installment of This Day In Hoya History.