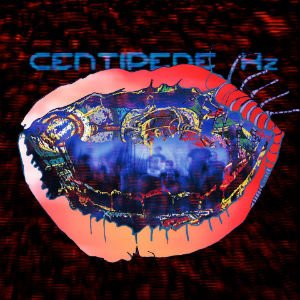 Animal Collective’s highly anticipated eighth album, Centipede Hz, explodes through the eardrums of indie music lovers with tracks pulsating with electronic bliss and catchy melodies. Full of the Baltimore-based band’s signature weirdness and fun sound, Centipede is a breath of fresh air in the current music scene. Every track’s energy is contagious, driving its neo-funk, psychedelic-folk sound. It’s an album to keep handy while choreographing an interpretive dance.

“Moonjock” begins the album’s futuristic escapade with pounding beats and motivational harmonies characteristic of Animal Collective, are a bit hard to follow. At first listen, you aren’t sure where the track is going, but its melody carries the band to a climax of intergalactic sound.

The second track, “Today’s Supernatural,” is screechy, and at points there are so many sounds that you feel like your eardrums might explode. However, the track does come together, and Panda Bear, the band’s lead singer, somehow makes sense of the cacophony. “Rosie Oh” and “Applesauce” are playful tracks full of Animal Collective quirkiness. Is that a frog croaking? I hope so.

The fifth track, “Wide Eyed” is a bit dry but serves its purpose as mid-album filler. Its composition may not be as impressive as the rest of the album, but a closer listen to the lyrics evokes feelings of self-doubt and insecurity. Venturing through Centipede is like bouncing from arcade game to arcade game with endless amounts of tokens. The track “Pulleys” is an adventure all on its own – it has an intensity that pulsates through hardcore beats and gyrating vocals.

“Amanita” finishes up the album with pounding bass and lyrics like “What have we done? Fantasy is falling down.” The album ends with passion as the pace of “Amanita” builds and then suddenly comes to a halt, leaving the listener speechless and craving more. Each track throughout Centipede has a different feeling but the same amount of energy, melodic awesomeness, and berserk sound.

Animal Collective manages to stay fresh while maintaining a unique charm on Centipede Hz. This is an album I will definitely have on repeat, whether I’m partying or studying in Lau.