A week after returning to the Golden State from Georgetown, I have realized that California is even more ridiculous than you think. We don’t just live up to every stereotype you have about Californians: we are even worse than you could have ever imagined. Here is a rundown of some of the things I have encountered during my first week back in the San Francisco Bay Area:

The Airport: If you have ever had a two minute conversation with me, I have probably brought up how amazing SFO is, and you probably were annoyed and tried to change the subject. If you ever doubted things you’ve heard about California, your doubts will be erased the minute you step off your plane and into the airport. First of all, SFO has a Yoga Room. Second of all, SFO has a farmer’s market. Let me repeat-there is a farmer’s market inside of an airport. California.

The Food: On my first day at home, I decided to make myself a PB&J. The peanut butter: all-natural, unsalted and made with unblanched peanuts. The jelly: organic, locally grown strawberry fruit spread. The bread: organic, non-GMO, with 21 whole grains and seeds. I also found quinoa clusters in my pantry, and wasn’t sure if I should be embarrassed or proud.

The Sports Stadiums: I went to see a Giants baseball game at AT&T Park. Behind center field, AT&T Park has an edible garden that grows blueberries, strawberries, avocados, tomatoes, peppers, squash, lettuces, lemons and kale. This produce is then picked fresh and made into salads, sandwiches and flatbreads that are sold to baseball fans. I am starting to realize why people hate California.

The Workplaces: On my first day at work, I rolled into my office at 9am. In our communal kitchen (which is fully stocked with all-natural tea, ethically-sourced coffee, several different types of recycling containers and three compost bins), there was a bottle of wine sitting on the table with a sign that said “to share.” I have also not seen anyone consuming any foods besides salad, produce and copious amounts of coffee.

The Conversations: Here are some actual things I have heard people say since I’ve been home- “I ate too much quinoa to eat my dolma too.” “Hold on, I have quinoa in my teeth.” “That new farm-to-table marijuana delivery startup is doing well.”

The Transportation: On Thursday, it was bike-to-work day in SF – as if everyone here doesn’t already ride their bike to work every day. I’ve also participated in something called casual carpool, where you literally just get into a random person’s car and ride into the city for $1. I’m pretty sure this is something that would only happen on the West Coast. Bonus: I saw someone simultaneously driving a Prius and playing a guitar.

They say stereotyping is bad, but I am here to confirm that every stereotype about California is completely and totally true. And with that, I will return to eating my organic avocado and kale salad and sipping on my acai and wheatgrass smoothie.

Wine night, The Tombs’ weekly Sunday-night celebration of wine, has been cancelled indefinitely, 4E has learned.

Hopefully you’ve made alternate plans for your Sunday nights since you definitely won’t be enjoying half-off bottles of wine at The Tombs in the foreseeable future. We can only hope The Tombs reinstates wine nights as soon as possible so we can get back to our usual Sunday routine.

Every now and then, even the most self-possessed Georgetown students will come to find themselves at the point where they just. Can’t. Even. Whether you’ve been #raging every night or you’ve spent so much time on Lau 5 that you’re starting to develop a fluorescent glow (’cause you know, here on the Hilltop we’re all about the Work-Hard-Play-Hard), what you really need is a healthy dose of downtime. Here at 4E, movie nights are one of our favorite ways to chill out after a long week on the daily grind – and we’re bringing you a list of the best ones, and how to do them right:

Everything you do on Binge Night must be to absolute excess. Bury yourself in a mountain of pillows, then pick a classic series like Harry Potter or something absurd thrilling like Saw (things really pick up around number IV) and watch it through from start to finish. If you don’t consume at least 4,000 calories – I’m talking a large Domino’s pizza, a pint of Ben & Jerry’s per person, all the Wisey’s cookies (even oatmeal raisin) and a never-ending supply of cool ranch Doritos – you’re doing something wrong. Binge Nights typically end around 4 in the morning, when the last kid standing feebly finds the remote under one of his snoring friends, hits mute and promptly passes out on an empty box of donuts.

Coming home to some milk & cookies and a Disney movie is just as satisfying after midterms week as it was back in the 90s after an arduous half-day at kindergarten. Take a trip down memory lane with a timeless pick from the Disney vault like The Lion King, or stay young and hip with the more recent hits like Up, Tangled, and Frozen (FYI: resisting Frozen does not make you cool/hipster). If you’re not into cartoons, there are plenty of awesome Disney Channel Original Movies (#tbt to the kids jumping on the blue film roll) that will make you wish you were ten again, when all your favorite celebs had yet to check into rehab.

Girls’ night is romantic comedy central. Grab your closest galpals, bust out the facemasks and copies of Cosmo, and snuggle up to a three-hour gossip sesh/pity party set against the dulcet tones of Dirty Dancing or Sweet Home Alabama. As awesome as Girls’ Night is, tread with care: it will inevitably leave you at best bemoaning the lack of Brads/Leos/Channings in the general DC area, and at worst texting that only semi-attractive kid in your Calc class with the hopes that he might be the Aaron Samuels to your Katie Cady Heron.

The male equivalent to the RomCom fest, #ForTheBoys Night involves spending some quality time with your number one bros – no chicks allowed. Testosterone levels will be through the roof once everyone starts doing the Matthew McConaughey Wolf of Wall Street chant in unison whilst snacking on beef jerky.

Cultured Night is the perfect opportunity for you and your friends to revel in the fact that you’re fancy and intellectual, because hey – you’re in college now! Gather round an obscure indie (or something slightly more mainstream) flick like The Grand Budapest Hotel, and dive into some fair-trade organic Trader Joe’s popcorn (the Kettle Corn is seeerrrriously good). You don’t really gets what’s going on, but you still feel really impressed with yourself because would you look at this artsy movie I’m watching!? If you’re feeling really brave, you might just even go foreign. Did someone say Sundance?

For those who are 21 and up, wine can be the perfect complement to a movie night at home.  Just as you drink different kinds of wine with different meals, so too must you carefully choose your grape in accordance with your featured genre.  That said, there is one specific wine-movie pair that stands out above the rest: Reds and Romance.  Let’s face it – it’s a cliché for a reason: crying hysterically over Titanic is so much more rewarding if you’re a little (or a lot) drunk.

Also recommended: The Notebook, Romeo & Juliet, The Last Song, Casablanca, The Fault in Our Stars, The English Patient, P.S. I Love You, The Time Traveler’s Wife

(Note: The principles of the Wine Night can be successfully applied to any of the nights mentioned above).

So those are some of 4E’s tested and approved movie nights. But feel free to gather your friends, grab some snacks and begin your own special movie night tradition!

Wine. It tastes better than Burnett’s. It is often imbibed on Wednesdays because of the brilliant opportunity it poses for alliteration. And it gives you horrendous hangovers. Or so they tell me. While I couldn’t possibly have any first-hand knowledge of this type of fire-water outside of Sunday Mass, apparently my fellow Washingtonians have plenty of experience with Bacchus’ favorite drink.

According to InTheCapital, the average Washingtonian drinks 25.7 liters of wine per year. This is the most liters per capita of wine consumed by any state, or in D.C.’s case, District. That’s right, our humble little District beat out even the most famous wine drinkers in California by 11.7 liters. If you don’t believe me check out this beautifully color coded map InTheCapital provided: 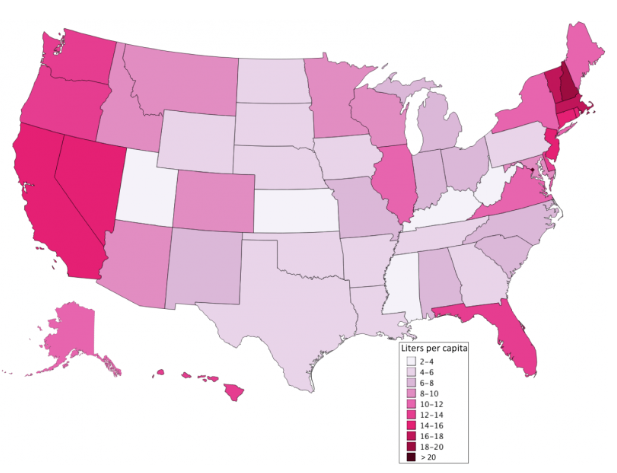 That’s us, the minuscule blood-red spot in Maryland. Looks like a red wine stain on the patchwork pink shirt that is America.

In trying to find some sort of takeaway from the vital information InTheCapital has reported, let’s turn to MTV’s “Awkward” for some clarity:

With this sagely advice, I now dub the District of Columbia the new City of Love. (Move over, Verona and Venice.) Cheers to our D.C. lovers and cheers to their impending wine-fueled headaches!