.@ConanOBrien I'm considering going as hunky Conan O'Brien – but that might be too far fetched.

.@ConanOBrien Never get into a word war with a diplomat. We talk even more than comedians.

Madeleine Albright — she’s just like us. Well, insofar as that she’s also a fan of Leslie Knope, the quirky former city councilwoman of Pawnee played by Amy Poehler on “Parks and Recreation.” The former Secretary of State and current Georgetown professor gave both Poehler and her beloved character a shoutout earlier this week in a tweet that would surely make Knope squeal with joy.

Congrats Amy Poehler on your #EmmysNoms! Can you get this to our mutual friend at @parksandrecnbc? pic.twitter.com/JFAqRgGHs2

Madeleine, you’re not alone. We love Leslie too. And Leslie, we agree, just keep doing what you’re doing — we just hope that autographed portrait somehow makes its way into the show’s upcoming seventh season.

Yesterday, while you were celebrating America, Perez Hilton was taking in the sites of Georgetown and Washington, D.C. Before venturing over to Georgetown, the celebrity blogger spent time at some of D.C.’s most popular tourist attractions on July 3 and 4. He posted the picture below to his Instagram account of him with his mother, Teresita Lavandeira, and his 1-year-old son, Mario Armando Lavandeira III,  at the Capitol.

Later in the day, Hilton visited some of Georgetown’s classic spots. He conquered the Exorcist Steps:

He was put off by the line outside of Georgetown Cupcake. Clearly no one told him about Baked and Wired:

@GTownCupcake Was hoping to stop in and get some cupcakes but the line today was crazy. Good problem to have! Ha pic.twitter.com/oepLfCmTs7

And he had the same thoughts we all have when walking past the gigantic townhouses in Georgetown — I wish I could live here:

I could live in #DC! So beautiful and so much to do here!!! #Georgetown pic.twitter.com/cwDhMNiSRx

Finally, he made his way to campus and was as impressed as we all were the first time we saw Healy:

He showed off his patriotism on the lawn:

We can’t think of a better way to spend the Fourth of July than visiting Georgetown’s campus — good choice, Perez.

Has Tinder become boring for you? It certainly has for us at the Fourth Edition. In our fast-paced blogging world we get tired of apps really quickly. Luckily, one brave soul named Samer Kalaf from theconcourse.deadspin.com recently pioneered a new approach to the dating app. In a risky and possibly reputation-demolishing move, the groundbreaking journalist decided to communicate with his dating prospects solely through Jaden Smith’s tweets (@officialjaden). Kalaf was looking for the perfect woman, a woman who would appreciate the complexity and intellectual depth of Jaden Smith’s sage tweets. 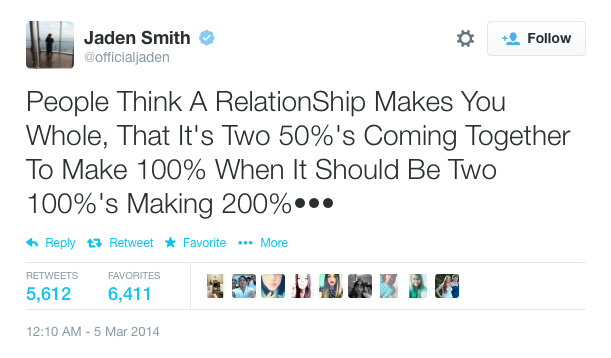 The results are glorious.

The Fourth Edition, as usual, would like to suggest that you try this at home. Here are some of the characters, celebrities and movies you should attempt to impersonate via Tinder and some quotes that are particularly apropos:

Any quality quotes we’ve missed? Share your most inspired ideas with us in the comments section below!

Here on the Hilltop, we already pride ourselves on being smart, but now, we can celebrate a new accomplishment: being social media savvy. According to InTheCapital, Georgetown University garnered the best Klout score of all D.C.-area schools.

Klout is an analytics company started in 2008 that aims to measure users’ “influence” through social media presence. It tracks over 400 signals from 8 different social networks and then assigns users a score from 1 to 100. The higher the score given, the more influence a user has.

(President Obama currently boasts a Klout score of 99, while Justin Bieber and Zooey Deschanel received scores of 92 and 86, respectively.)

With active accounts on all of Klout’s measured platforms (including Instagram, Facebook and Twitter), Georgetown took the top spot for its social media presence with a score of 92. Close behind were Johns Hopkins and — sadly — George Washington University with scores of 91. University of Maryland and University of Virginia finished in the top five both with scores of 90.

As everyone knows (and if you don’t know, you’ve apparently been under a rock for the last week), the federal government has been shut down due to a failure to agree on a new debt budget.  Social media, especially Twitter, has been EN FUEGO (on fire, for our non-Spanish speaking readers) with commentary on the shutdown. These tweets have been witty, sad, controversial and everything in between.  Here are the 5 Steps for Coping with the Government Shutdown, As Told By Social Media*: 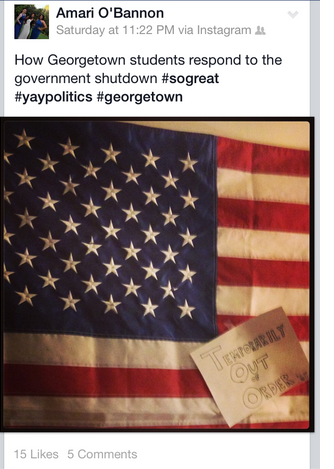 *Disclaimer: these posts are not representative of my views or those of The Hoya. They simply made me chuckle:

If your first reaction was one similar to theirs, you should probably check out this article from early last week.

Now that people began to understand what the shutdown meant, the posts became a little calmer, albeit a bit melodramatic.

How does the shutdown affect you? What should you look out for?

4. Try to Find a Solution

Some Hoyas on Facebook had some advice for getting through the shutdown:

5. Look at the Silver Lining

You aren’t in Congress, so unfortunately, there isn’t a whole lot we can do at the moment. Just try and look at the bright side!

While the government shutdown is certainly no laughing matter, at least these students and celebrities helped me get a laugh out of the ordeal.  If you are looking for more bizarre humor, just search “government shutdown pickup lines” on Twitter. Yup, it’s trending.  Hopefully this will be the last shutdown post out of us, and a big thank you to those of you that made it possible.  Keep up the good work!

That’s right. There’s a new tweeter in town, and it’s none other than our favorite  brooch-branding former-Secretary-of-State-turned-Georgetown-faculty-member, Madeleine Albright.

As of yesterday, Secretary Albright had officially set up a Twitter. Her first tweet, which featured a nifty photo of her in a “Tweet” pin (how festive!) read: 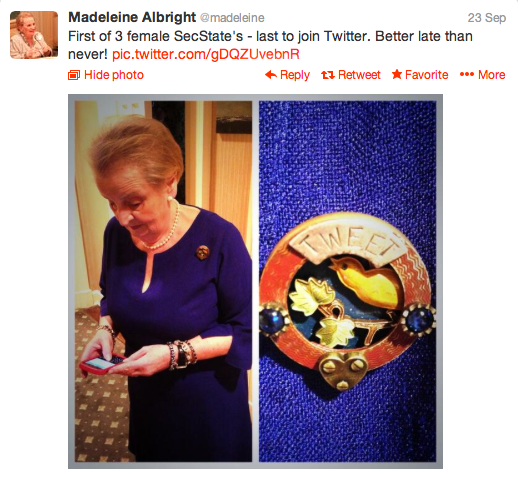 Though new to the Twitter scene, Secretary Albright has sure hit the ground running. She’s already been tweeted at by – and has responded to – Suzanne Philion (@SuzKP) and Hillary Clinton (@HillaryClinton). She’s also talked about one of her special musical talents.

To find out more about Madeleine’s entry into the Twitter-verse, check out her page here and be sure to follow her at @madeleine. And, as always, be sure to follow us @thehoya4E for our latest stories, tips and tricks. Happy tweeting, Hoyas! (That includes you, Madeleine!) 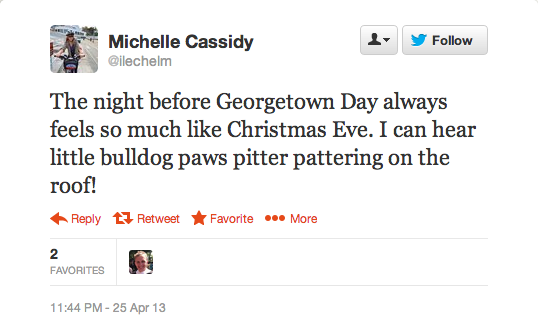 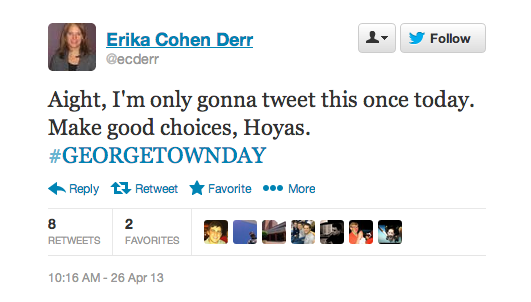 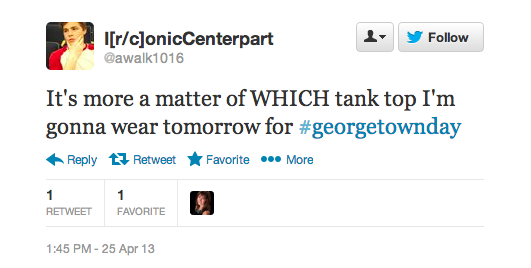 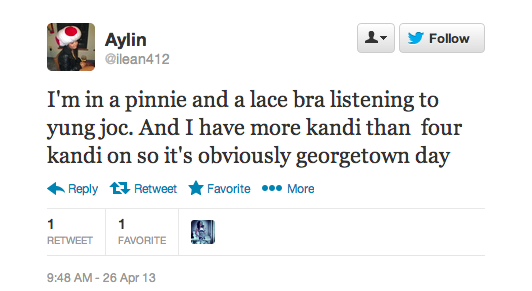 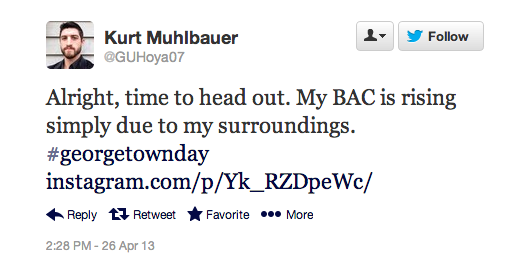 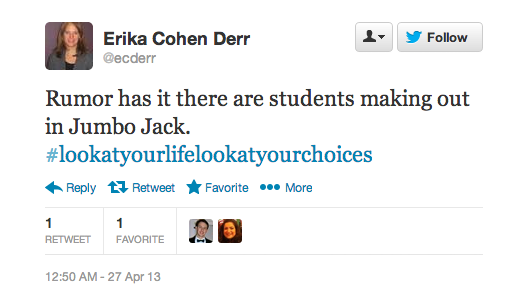 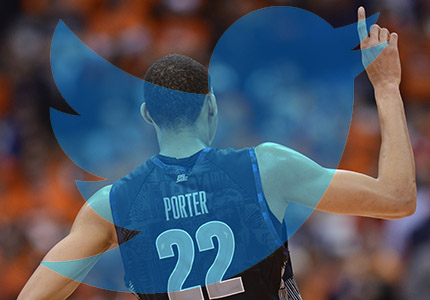 There are some pretty interesting Twitter accounts out there (cough @PizzaAtLeos cough), and in the light of Otto Porter’s recent success, another has arisen.

This Twitter is devoted to praising all things Otto (and there are many things to praise in these exciting times for GU basketball) and is sure to be the next big Georgetown Twitter fad.

Here are some of our favorites, just to give you a sneak peek. Be sure to check it out, especially with Rutgers on Saturday and Syracuse on the 9th! (YOU’D BETTER BE BACK FROM HOME/VACATION FOR THAT GAME).

And my personal favorite: