As a Blue & Gray tour guide took me on a tour of Georgetown’s campus during my junior year of high school, she told me and the tour group that Georgetown had four freshman dorms : New South, VCW, Harbin and Darnall. Just those four.  As a result, I was quite surprised when I received news that I was assigned to a different dorm: Village C East. As you can imagine, my reaction was one of shock:

Sure enough, I found out that there was indeed a secret (but actually not-so-secret) dorm. I’m not alone in my shock; I tell people where I live and most of them respond with the same question: Where? I had no idea of what to expect when I showed up on move-in day. It turns out that VCE is quite similar to VCW (minus the two-winged design). Private bathrooms, straight hallways, and sewage flooding your room are some of the wonderful things to look forward to in VCE.

After living here for about five months now, I can release my impartial rundown of VCE’s famed freshmen floors:

Although not all VCEers enjoy their experience, some freshmen, particularly those on the eighth floor, rave about their VCExperience. Overall, VCE has given me quite an interesting experience, and I’ll definitely have stories to tell for the rest of my life.

In the wake of last week’s Valentine’s Day stress, I’m excited to share something to lift everyone’s spirits. On Feb. 28, Flight will have its highly anticipated grand opening in Springfield, Va. What is Flight? According to DCist, it’s a trampoline park that consists of a trampoline field, foam pits and even dodgeball! 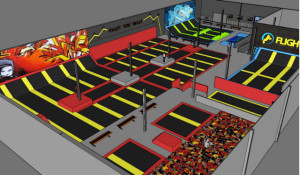 In just 22 minutes, you can get from campus to this little piece of heaven and have the flipping best time of your life. If you want to take a well-deserved break from studying for midterms, you can experience Flight in all of its glory from 10 a.m. to 9 p.m. Monday through Friday. For those willing to jump into action on the weekends, Flight is open 9 a.m. to 10 p.m. Saturday and 10 a.m. to 7 p.m. Sunday.

If you’re worried about missing the club atmosphere of Modern Thursdays or Malmaison, have no fear. Flight is soaring above expectations and hosting Club Flight, a trampoline area filled with lasers and music, on Fridays and Saturdays after 9 p.m. for ages 15 and up.

So put on some comfortable clothes and warm up your fingers to call an Uber, because Feb. 28 is just around the corner. And if you’re ever in Club Flight wondering why Beyoncé’s sneezing-sick beats keep getting requested for a hip-hopping good time, it’s probably a 4E blogger because we can’t wait to test this place out!