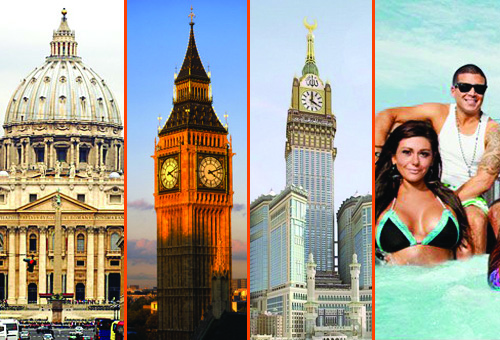 The clock hands on Healy Tower were finally put back this morning, but apparently they’re not the ones that were stolen. So while Healy can tell time again, the original hands are still at large. Join us as we consider their possible location.

Vatican City According to tradition, once the hands are stolen they should be sent to the Vatican for a blessing from the Pope, then returned. Hopefully they’re shaking hands with Pope Benedict right about now. But while our alleged clock thieves Reaper, Juliet and Goliath claim that the hands were safely on their way to the Vatican it could just be a ruse to hide their true destination.

London, England To visit Big Ben at Westminster Palace and exchange all the hottest clock-related gossip. I wouldn’t be surprised to find out that these famous clocks have been hiding a secret relationship for years. I mean, do we have any proof that they actually go to Italy? For all we know, they could be sharing a plate of fish and chips with Big Ben.

Mecca, Saudi Arabia But if we’re talking impressive clocks, there’s a chance that Healy’s hands are paying a visit to the Mecca Royal Hotel Clock Tower, which is home to the tallest clock tower in the world with the largest clock face, 46 meters in diameter. That’s a whole lot of clock.

New Jersey 90% of Georgetown is from here anyway, maybe the hands just skipped out on finals and headed home, leaving the clock tower to deal with its 19th Century Gothic Architecture final alone.