Every so often, us girls have those nights that inevitably end in two empty pans of Betty Crocker brownies, five episodes of “One Tree Hill,” emotional hair-braiding sessions and possibly tears while falling asleep to Taylor Swift’s “Cold As You.” We stay up long after the Netflix binge, reflecting on how we literally can’t even deal with why college boys can’t measure up to Chad Michael Murray.

But then there are those times when the nonexistent date you were just complaining about does happen, and is so uncomfortable that you find yourself wishing you had never prayed to Ryan Gosling about your relationship problems in the first place. Allow Jane Hoya to take you through that cringe-worthy dinner and bring back the memories you’ve tried to black out of your romantic history.

7:14 p.m. He’s standing behind her but she doesn’t notice, as she is preoccupied confirming to the waiter that yes, she has in fact finished the bread basket, and yes, she’d like it refilled before her friend gets here.

7:15 p.m. Jane is still trying to recover from the bread fiasco when here comes her Spanish professor who has spotted her in the restaurant. Now she must simultaneously greet them. Are introductions necessary here? Does she stand? No hugging.

7:20 p.m. Orders burger first. He orders a salad. Without dressing. No croutons?!

7:22 p.m. Jane makes small talk. Complains about two tests this week. He had three midterms, a research paper and his dog died.

7:29 p.m. Conversation at a lull. Accidentally has been rubbing his foot under the table. Thought it was a pole. Excuses herself for the bathroom.

7:40 p.m. There was a line. Was she really in the bathroom for 10 minutes? He’s probably jumping to some unfortunate conclusions right now.

7:45 p.m. Spanish professor comes back to the table for more conversation. Wants to speak in Spanish this time. Jane has barely spoken in English so far. Forced to speak in Spanish in front of date. May or may not have spit on him while rolling an “r.”

7:52 p.m. Meal comes. All of a sudden he’s asking a lot of questions. Maybe because he feels bored after having finished his lettuce and air in two bites while Jane is struggling to answer between mouthfuls of her burger.

8:19 p.m. Changes his mind. Maybe she could throw a few dollars in because burgers generally cost a little more than lettuce.

8:30 p.m. They walk home. He wants to know if they could do that again sometime. What’s the least awkward way to say no? Settles for “I’m busy every evening for the rest of the semester. See you in class tomorrow! Deuces!” Crushed it.

So there you have it, a fun reminder that not going on dates doesn’t necessarily mean you’re missing out on a great time. But what to do if your evening was eerily similar to Jane Hoya’s? Either you pretend it didn’t happen or you watch enough episodes of “Dating Naked” to make you feel better about yourself, because at the very least you weren’t desperate enough to ride a Jetski with a nude stranger. (Note: If this date was especially awkward, you may need to alternate with episodes of “Teen Mom.” Dodged a bullet there!)

“Club season,” as some (by some, I mean me) have dubbed it, is almost over at Georgetown. Like my mother astutely commented, applying to clubs at Georgetown is “almost like reapplying to college.” First, let’s acknowledge that there are some great clubs that do not require you to send applications. Here’s to you GIVES, GUGS and many more.

Secondly, one of the reasons clubs can be very competitive at Georgetown is that we Hoyas are generally a great group of kids. It’s almost unfair, am I right? Still, no matter how formidable the competition was, rejection can be tough. We at 4E understand and are here to help. One of my personal idols, Mindy Kaling, once said, “You should know I disagree with a lot of traditional advice. For instance, they say the best revenge is living well. I say it’s acid in the face — who will love them now?” In that spirit, here is 4E’s guide on how to get back at clubs that have rejected you.

As Celine Dion once said:

Near, far, wherever you are
I believe that the heart does go on
Once more you open the door
And you’re here in my heart
And my heart will go on and on
And I love Burritos

I’ll just have to go to Chipotle now. On second thought, that doesn’t make me very sad at all. PEACE QDOBA!

Now that we’ve sufficiently moved on via Celine and Taylor, it’s time to look to the future: Alice and Olivia is opening in Qdoba’s place. Why couldn’t these two stores just make an agreement to sell burritos and adorable dresses together? I would never leave.

Here are some Alice and Olivia ensembles that may be better than Mexican food: 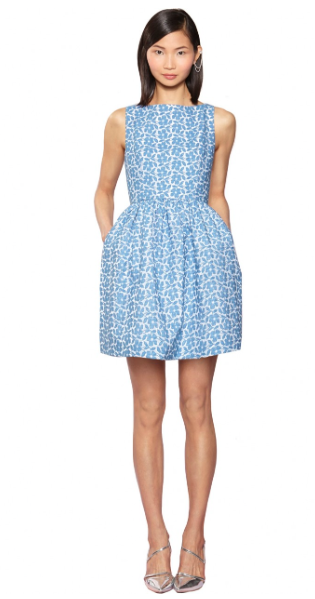 Note that we are choosing $500 dresses here over $6 burritos. So this may not be an even match or a smart choice — but look at that puffy skirt!

Moral of the story is: spend money on expensive dresses when Mexican food eateries break your heart.

If there are three things that Kanye West does best, they are the following:

1. Being provocative
2. Being dramatic
3. Being unintentionally hilarious

After making the entire musically-inclined corner of the internet explode by cryptically tweeting “June 18th,” which has since become the presumed release date of his new solo album, Kanye has been playing with us like a killer whale plays with a seal. (Deputy editor’s note: If you haven’t seen a killer whale playing with a seal, please watch this video. It is very graphic and disturbing, and it is very much like this moment where Kanye is the whale and Taylor Swift is the seal. Also, speaking of killer whales and Kanye West, this just speaks for itself.)

On the 17th, Kanye tweeted that his newest single would be premiering in a unique fashion – with installation art video performances at scheduled locations across the globe.

The song that premiered on the sides of buildings all over the world is the supposed first single off the new solo album – possibly titled “Yeezus” – and is called “New Slaves.”

Kanye has never been one to shy away from controversial statements about race in America or about life in general and this new track is certainly no exception. Juxtaposing the standards of life on the streets and life among the stars, “New Slaves” certainly follows West’s knack for stirring up polemic audience responses.

“New Slaves” is less personal than some of his other tracks have been, considering the fact that all of 2010’s My Beautiful Dark Twisted Fantasy (one of my favorite albums ever) is essentially a musical therapy session over the loss of his mother and the fallout over the Taylor Swift incident but Yeezy’s characteristic self-awareness is still evident. He knows that he is firmly entrenched in the upper echelon he raps about, but he still sees the effects of racism even at the top.

But it’s Kanye, so it’s bursting with attitude and loud-mouthed swagger. I’m already obsessed with it. Kanye has mastered the art of using overwhelming narcissism and materialism to cope with self-loathing and it shows on this track.

He performed the song again this past Saturday as the musical guest on Saturday Night Live along with another new song called “Black Skin Head.” There’s clearly a heavy racial element going on with his new tracks, which may make some fans uncomfortable if the theme continues on the rest of the new album, but I doubt Kanye really cares how you feel.

If you’re ever feeling down, y’all should really consider trying Kanye’s coping method. It’s hard to feel bad about yourself when you walk around acting like the sun shines for no one but you. In the meantime though, keep your eyes out for the latest music and antics from the ever-controversial Kanye.

Want to get free seats at T-Swift’s Verizon Center Show? Here’s how it can happen:

Diet Coke will be releasing a series of “Swift-inspired” scavenger hunt clues on its Twitter, @DietCoke, beginning at 8am tomorrow morning! The @DietCoke clues will ultimately lead Swift fans to a secret “Silver Ticket” location in the D.C. area. The first eight fans (who are 18 and older) to reach the secret “Silver Ticket” location will receive two passes to Taylor’s May 11 Concert at the Verizon Center.

D.C. is one of several cities that Diet Coke has chosen to launch their “Silver Ticket” sweepstakes in partnership with Taylor Swift. Swift was recently chosen as a centerpiece in Diet Coke’s Stay Extraordinary campaign, on which she will serve as a brand ambassador for numerous initiatives and ad campaigns.

So what are you waiting for, Hoyas? Forget finals, put down your cup of coffee and forget your struggles! Who wouldn’t want free tickets, especially for something like this:

Guide Grooves from October 5 from thehoya on 8tracks Radio.

If you didn’t find the time to read The Guide over the long weekend (or if you scampered from town before the issue came out), you missed out on the best guide to food in D.C. Too bad. Fortunately, though we’ve got a taste (no pun intended — or was it?) of the music reviewed in last week’s issue. Muse — everyone’s favorite mildly rebellious British band — released an album we thought could be “the soundtrack to almost any bad dystopian movie” in  a disappointing follow-up to their incredible 2009 album The Resitance. In the meantime, Matt & Kim continued to astound us with their awesome vocals an drum beats. So, take a break to enjoy these awesome (or maybe not-so-awesome) new beats.

The 2nd Law: Unsustainable — Muse I sort of feel like I’m drowning or watching a movie where the world collapses for the first minute, then the song gets so boring I get depressed at how such a great band like Muse could make a song this subpar. It feels like the band itself is living in a dystopia.

Madness — Muse By far the best song from The 2nd Law. It reminds us of Muse’s roots in a strong lead male vocal, superb beats and an electronic-type beat that is interesting, yet consistent throughout the song.

Now — Matt & Kim This is a totally different style of song for Matt & Kim. That said, it’s a great use of their already-proven talents — Matt’s truly unique voice that exudes positivity and makes you want to dance and Kim’s being absolutely stellar on the drums. Love this song.

It’s Alright — Matt & Kim I couldn’t agree more with The Guide’s review that this song is one of the most danceable songs ever created by this duo. Try not to tap your feet. I dare you.

Ride — Lana Del Rey We all know the Lana Del Rey jokes about her performance earlier this year on SNL. Yes, it was awful. And, yes, “Video Games” is one song I hope to never hear as long as I live. But I like this song! And for someone who hates Lana Del Rey as much as I do, that says a lot.

Closer — Tegan and Sara I am totally moving my head obnoxiously and every time that they scoop their voice at the end of the song I get very happy. A generally good song.

Red — Taylor Swift This song sounds like every other Taylor Swift song, so you’ll probably like it. I don’t, but I don’t like T-Swift all that much. This song also bothers me because the first line is, “Love is like driving a new Maserati down a dead end street.” What, T-Swift? Sorry…