This was the first week since May where you didn’t start sweating immediately after you walked outside. And even though this lack of sweat was a completely foreign feeling to me — especially after having spent an oppressive summer in D.C. — I couldn’t get enough of it. The crisp mornings and evenings of fall are upon us. But it’s still warm enough to wear shorts and tanks everywhere. So, to commemorate the most awesome weather ever this week, I’m dedicating this week’s fixat10ns to this spell of crisp mornings, sunny afternoons, refreshing breezes and mildly chilly nights.

Sunshine — Matt Costa How could one not want to listen to this song on a day like today?

Morning Now — That Ghost I’m mildly upset with myself that I only just discovered this song a week ago, even though it’s been out for six months. It’s a beautiful song.

We Own the Sky — M83 Like all M83 songs, this is a great morning song. But it only works if you’re emerging into a beautiful day.

Paradise — Coldplay In stark contrast to the rest of the summer, this past week sure felt like paradise.

Wilson — The Salvadors This song probably doesn’t really fit in this mix. I just listened to it a lot in the springtime and so I thought I should include it.

Sky — Joshua Radin feat. Ingrid Michaelson If I could have one person serenade me, it would be Joshua Radin with this song.

Dirty Paws — Of Monsters and Men I’m totally obsessed with this song. Warning: this song is so beautiful that it will make you so happy you might start crying.

Hell of a Season — The Black Keys These guys are pretty great. This song is appropriate, also, as we are approaching the best season of them all.

Deep Blue — Arcade Fire The sky was very blue this week. Also Arcade Fire rocks. I listen to their newest album on repeat. 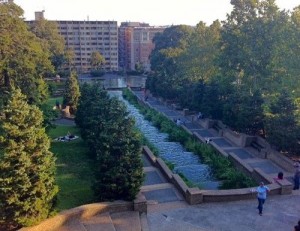 To start off, no allusions to Ron Swanson and Amy Poehler found their way into this post (sorry), but in the spirit of Spring, stop watching Hulu and get outside. Now with temperatures promising to stay in the seventies for the rest of the week (or so says my Blackberry, which has been wrong before) and the Georgetown community’s complaints about obscene sunbathing habits on campus, where can one go to find a nice place to soak up some sun in the city? I know I’ve been going stir crazy being cooped up inside these past few months, and lets face it, we all know why everyone is happier in California (and it’s not something in the water), so for everyone’s sake, get off campus and enjoy the weather before it gets too humid (there are even free things you can do).

1. The National Portrait Gallery Sculpture Garden, part of the National Gallery of Art, located down 7th Street from Verizon Center and Constitution Avenue, is a great place to see modern art in a peaceful urban setting. It also offers free jazz concerts on the weekends, and with its proximity to the National Mall, the other Smithsonian museums in the area are easily accessible. The easiest way to get to the Sculpture Garden is to walk to the Foggy Bottom metro and take either the Orange or Blue Line to the Archives stop.

2. While it may seem obvious, go to the ZOO! After you’re done walking around looking at the animals, you’re not very far from either Adams Morgan or Cleveland Park, if you get hungry. The easiest way to get to the Zoo would be to take the GUTS bus to DuPont Circle and catch the Red Line to Woodley Park-Zoo/Adams Morgan. Its about a ten minute walk or so from the metro station to the zoo up Connecticut Avenue.