They say that the enemy of success is comfort. Leo’s is likely to be a place you find yourself often — and if not poopoo for you, because Leo’s is HOT. The triumphant marketing team’s latest endeavor, inspired by the altruistic and chumley community that is the Hilltop, has developed table sharing signs. Not only are these well designed “Dining Solo? Join me, this is a shareable table” signs equipped to add flare to your table and meal, but they are also something bigger. They are invitation to community, to love, and to the ever-beloved networking skills  that Hoyas pride themselves on.

While the prospect of inviting or approaching a fellow stranger to share company over a meal of chicken fingers may seem daunting, 4E urges you to take the leap — for as some wise human once said, “achievement thrives on the extended peripheries of our comfort zones,” or something like that. If you take the leap this may happen…

Heard the stories? It could be you. Sit down stay awhile. A long while. Eventually you’ll be buried together.

Who knows maybe you’ll end up getting Leo’s together every night?! Be each other’s best man? Go to your kids first birthdays? Retire together? There is so much room for possibilities.

Uhuh hunny. Handshake is the name, entrepreneurship is the game. Let Chicken Finger Thursday inspire you to develop the next Facebook, waffle press, air travel machine…

When they sat down you thought they looked familiar, but the more their little idiosyncaries begin to reveal themselves, like how he says bro after every other word, or laughs lika hyena… it finally clicks, your roommate used to go out with him. Now you sit, devour your food, and hope nobody saw you.

Hey, this could very much be the biggest liability of taking the leap. But really, how bad could having someone’s undivided attention be?… There’s always restraining orders if you start to feel unsafe. 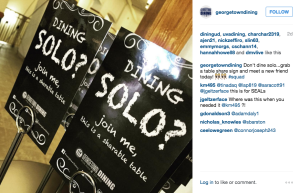 A new and mysterious program, Dinner with 7 Strangers, has taken the Hoya world by storm, and 4E has several questions:

What if I get stuck with a bunch of duds?

Is this some type of elaborate scam to expose people who are desperate for friends?

Although the premise of the program is to meet new people and have dinner with strangers, there’s always the possibility that your dinner might include awkward acquaintances and people you semi-know, or people you never want to see again.

Here are 7 people you might meet at your dinner with 7 “strangers”:

2. That boy you hooked up with at Brown House, only to realize you had Econ and Problem of God together. Also, you’ve butt-dialed him several times despite the fact that you haven’t talked to him since the DFMO. Now you’re sitting across the dinner table from him.

3. Your professor whose class you slept through every single day. Also, your final paper was accidentally written in Comic Sans.

4. Your nightmare roommate from freshman year who you ditched second semester and never talked to again. They ate weird food in your bed and barfed on your pillow, and watching them eat their meal is giving you horrible flashbacks.

5. The GERMS worker who rescued you after you fell down Harbin stairs and/or slipped in your own vomit.

6. Your future husband/wife. According to super scientific studies that Blue and Gray tour guides like to relay in order to get overly eager parents excited about grandkids, 70% of Hoyas marry other Hoyas. Wouldn’t it be a great story to tell if you meet your future spouse on what boils down to a blind date with 6 other random people?

7. Hey, you never know, maybe you will get to eat with Bradley Cooper! Can Georgetown Alumni sign up? Please say yes! One dinner with him and, who knows, maybe you will be on the cover of People.

In reality, Dinner with 7 Strangers sounds really cool and you should sign up. You might get the opportunity to meet some really incredible people *cough* me *cough*. Or you might have the most uncomfortable two hours of your life. Either way, you are sure to have some wonderful stories to tell. Also, free food.

As the summer is winding down (I know, I can’t believe it’s already August), many of you are probably getting ready for your last weekend away, or maybe returning home after a long vacation. Either way, you’re likely to spot a lot of travelers at the airport. Some will be friendly and fun to sit next to, and others, well … not so much. As you jet-set one last time before coming back to Georgetown, look out for these eight types of people you’ll see on planes.

He’s not sitting in first class (shocker) because he’s probably a junior exec. who hasn’t quite reached that six figure salary. He’ll be hammering away on his laptop the whole flight, and the flight attendant will have to physically pry it out of his hands as you’re landing: “Sir, you must turn off all electronic devices NOW”. He won’t talk very much, except for the occasional muttering under his breath. If you plan on getting any sleep but you happen to sit near him, you’d better not mind the sound of keys clacking.

2. The Guy Who Snores

He’s probably been asleep ever since you got on the plane. Valid question: How did he get on here anyway? And you won’t see him wake up until the flight attendant shakes him at his destination. His snore can be heard throughout half the airplane and he’s slumped over on the poor person next to him (which could be you!). Especially if he’s in the aisle seat, you’ll be holding him the whole flight. Get ready to get cozy!

3. The Mom With Kids

Traveling with three, four or five young kids is hard. You definitely respect her – but that doesn’t make her brood any less noisy. The kids are adorable to look at, but you know during takeoff and landing, they’re going to cry and scream. If you’re sitting next to them, you’ll have buddies to color and play cards, but no way are you getting a wink of sleep.

She’s a little afraid of flying, so how does she cope? Alcohol. She’s already had a cocktail or two, and as soon as the beverage cart comes around, she’s ordering wine. She’ll be slurring her words, stumbling to the bathroom and maybe even imitating Snoring Guy at the end of the flight. You’re slightly jealous of her and her dedication to turning up, but she doesn’t make the best travel companion.

They never leave each other’s side. They’re adorable and clearly going on some romantic vacation but their lovey-dovey babble makes you want to throw up. Watching them kiss and hold hands for several hours straight is even worse than the turbulence. Also, you might be secretly envious of them (mile-high club anybody?).

Her bags are twice her size, and it requires two other people to help her get them into the overhead compartment. Her hair is completely tangled and she looks as if she ran all the way to the gate.  If you sit next to her she’ll be very sweet and apologetic for her appearance that is currently in shambles. Still, she will definitely spill her soda on you and elbow you on her way to the bathroom – whoops.

7. The Betch in Heels

The complete opposite of the mess, the betch in heels is completely put together – lipstick and jewelry ready to go. Her makeup and clothes look flawless even though she’s on a six hour flight. Nothing she’s wearing looks comfortable, especially those four inch heels she’s got on. Is it possible to pick someone up on an airplane?

Usually a woman, she’s adorable, tiny and wrinkled – the epitome of the perfect grandmother. She might have cookies in her bag, but to score one of those, you’ll need to divulge every detail of your personal life. This is including but not limited to your major, summer internship, siblings, pets, hometown and relationship status. You’ll get some lively conversation, but sleep is probably not an option.