Everyone knows that the brightest star of culinary television is THE Ina Garten, star of Barefoot Contessa. We’ve all had those days when we turn on the Food Network and suddenly 12 hours later realize that we’ve watched an entire season of Barefoot Contessa. I don’t really know what it is about this culinary goddess, but there’s nothing I enjoy more than plopping down on the couch and watching Ina work her magic. Still, I’ve been thinking of something even better. What if Ina took some time off from filming Barefoot Contessa and decided to spend a little time at the fine dining establishment O’Donovan’s on the Waterfront, known to some as Leo’s. Here’s what would happen:

1. Denim all day, every day

Any true fan of Ina Garten knows that she loves to rock the denim shirt on her shows. If Ina came to work at Leo’s, she’d for sure replace those plain uniforms with the ultra chic denim shirts that we’ve grown to love. 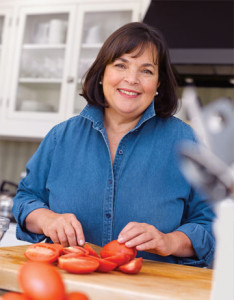 Ina always says that the secret to good cooking is perfectly seasoned food. She has been known to generously apply this concept when it comes to salt and pepper. If she were to work at Leo’s, never again would we have to scour the Leo’s floor for the always-coveted salt and pepper shakers. Ina would have our backs.

3. Leo’s would be fresh to death

Probably the greatest thing about Ina Garten is when she talks about the freshness of the ingredients she uses on her show. Ina’s attention to her ingredients has caused widespread popularity of the phrases “good olive oil” and “fresh, garden thyme.” If Ina cooked at Leo’s, the line would be out the door for one of her meals. Would anyone like a freshly grilled salmon that had just been fished out of the Potomac with Ina’s bare hands? I would! (Actually, I’ll pass on any Potomac fish for now.) 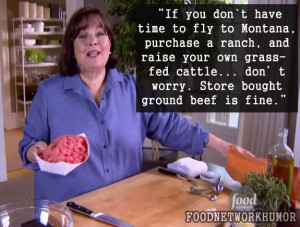 On the list of my top 5 favorite people of all time, Ina Garten would be up there, but her husband Jeffery wouldn’t be far behind. Jeffery brings absolute comic charm to Barefoot Contessa. He knows absolutely nothing about cooking, but every now and then Ina let’s him chop some basil or mix a drink. If Ina came to Leo’s, I hope she’d bring Jeffery along. Plus, Jeffery always does the dishes and I’d rather have Jeffery around than the scarily large rotating contraption that currently takes our dirty plates to the depths of the dining hall. 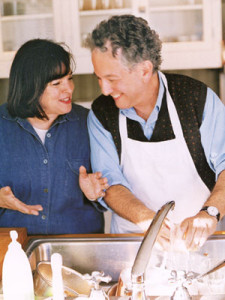 5. Leo’s lunch with a side of hugs

It is a well known fact that Ina Garten is the most huggable and loved of the Food Network royalty. The best thing about having Ina at Leo’s would be the wonderful joy she’d bring to all of our lives through her undeniably tender embrace.