For the first installment of “Meet the Professors” I got to interview Biology Professor Manus Patten. He currently teaches Foundations of Biology II (Bio 104), but in past semesters he has taught Genetic Conflicts, Genetics and Evolution. 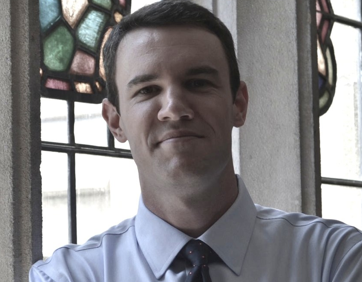 What is your focus within the field of Biology?
Evolutionary theory and genetics.

What is your favorite thing about teaching?
When I’m teaching I feel like I’m actually doing something useful, you know, like I’m contributing something. I actually feel useful for a change.

What attracted you to Georgetown?
I was looking for a job in D.C. and Georgetown was advertising one. I’m lucky to have a job at a good university.

What’s your favorite thing about Georgetown?
The students. That’s easy. That’s not bullsh*t either – I feel like we have job candidates coming through who ask what it’s like to teach here and I just say the students are great. You’re actually teaching when you’re teaching here. I have complaints about teaching, but I can’t air those to my friends at other universities because it’s really not fair. The students are really good.

What are your thoughts on Georgetown Day?
I used to sometimes call my mother when I had too many drinks in college, and the next day I would call to apologize. And my mom would just say, “It’s okay, it’s just nice to be thought of.” So if people still come to class on Georgetown Day, it’s a nice thing because they could be doing a bunch of other things. I’m quite warmed by their presence, however inebriated they are. Then a part of me – I get really nostalgic because it’s a nice spring day and everyone’s having fun and I’m in my professor clothes and I just want to join them.

Does any particular day in lecture stand out to you – something a student said or did?
Honestly when I’m lecturing I have no idea what anyone’s going through. Sometimes after class someone will complain that the back of the room was really hot but I didn’t notice. A student could say, “I can’t believe that person got up and left with a bloody finger!” and I honestly would have no idea that happened. One time a couple years back I gave a lecture on my research, which is on genomic researching, and it had been advertised in the catalog handout. I gave the example of a tigon and a liger and it was one slide for an hour just to make the point. And one woman was really pressing me after the lecture about a liger. “Are the ligers real?” Sure enough, I got a real weirdo.

What do you do outside of Georgetown?
I go home, and I have a one-year-old. Every day is basically the same. I usually get home in time for dinner and bath, and then put her to bed. Then I hang out with my wife.

Favorite memory of college?
I really enjoyed the senior week right before we graduated.

If you could have any celebrity do a guest lecture, who would it be?
David Foster Wallace, the writer, and I would make him talk to the science students about writing and then about life.

If you could be any organism what would you be?
Maybe a ginkgo – they’re tall, they’re really good-looking and they’ve been around forever so they’re tested. Every year they produce these fruit-like seedpods and they stink. So if someone has it coming, you get to even the score once a year. But only females have the seedpods, so I guess I’d be a female ginkgo.

Any advice to students on how to make the most of their time in college?
I got lucky – I was coddled in college by a few professors because I took an interest in what they were doing. I think that’s rare. Mark Edmundson in his book “Why Teach?” said that if you just spend time with people who reflect your own interests back to you, it’s impossible to grow. So I guess seek out “uncool” professors – find out how it’s possible for someone to be so interested in something that you’re not. I think in college there were a lot of subjects that I wrote off because I thought they were silly and boring, but I realize now that someone thinks they’re interesting. So the key would be to find out from them what it is. That’s the point of a university – on campus you get a chance to talk to somebody about what it’s like to be him or her. It’s just not about a transfer of content, which is what online classes are doing. Part of me is sickened by the idea of moving content online and having that be “college.” But college is not the content – it’s the other stuff.

As you can see, Dr. Patten is a really great professor. He cares about his students and his research and is obviously very interested in learning. Look out for him as you wander through Regents or when you’re picking your future courses!

Want to enter your favorite teacher?

We all have that place. It’s where, when the going gets tough, we hunker down and bust out that paper due in T-minus five hours, or cram as much information into our already occupied coffee-addicted minds. You could say that where you study is almost as important as what you’re studying. Which is why we at 4E have taken the time to prepare a little cheat sheet — not about econ or orgo but about what your favorite study place really says about you.

You thrive in chaos. You’re a social butterfly; however, you also suffer from extreme FOMO. You spend your weeknights sitting around a table with all of your best buds and the perfect view of the Midnight Mug line. You are either a connoisseur in the art of procrastinating or you really can get work done in the middle of pure pandemonium. If you are the latter, I commend you — you’ll survive in this world.

You are most likely in the business school or you just want to snag that booth. You are practical because you know that there will always be an outlet and it will usually be fairly quiet, until that 9 p.m. graduate business class gets out. You have an appreciation for the finer things as you soak up the light and airy ambiance of the MSB. Not to mention the bathrooms are pretty sweet.

You love the outdoors and want to embrace all and any good weather that comes along. You may suffer from seasonal depression, but when that first beautiful spring day hits campus, you’re the first one to snag the sunniest spot. You thrive while sprawled out on your plush blanket that you brought to college specifically for these lawn days. You are usually laid-back and carefree until the end of November and you see your precious lawn dusted with a layer of snow. Sorry if these next few months are a little rough for you.

You like some human interaction, but you are not willing to endure the chaos that ensues on Lau 2. You are rather sophisticated, people-watching, sipping your coffee and listening to your fantastic Spotify playlist. You like to feel cozy and independent as you rigorously study on the tiny table that can barely fit your laptop, coffee and notebook.

If you study in Regents you are either one or both of these things: Someone who has an established relationship with the Einstein’s swiper lady (because you take a bagel break more often than you should and need to be in close proximity to food), and/or a pre-med or science major and you only see the outside world from this building’s beautiful formula-filled windows. If you are one of the latter, you may feel at times that your social life is lacking, but have no fear. All of that studying will pay off … well, hopefully.

This campus is filled with an endless array of study spots that do not include the confines of your room. In the last few weeks of this semester, go explore these spots and at least try to study.

Now that I’ve spent about a semester and a half here I think it’s time that I provide you with a comprehensive list and appraisal of arguably the most necessary resources on campus: the bathrooms.

I’m going to stick to public bathrooms because you won’t let me inspect your private bathroom (still not entirely sure why, though) and because I think a review of Georgetown public bathrooms will be of greatest service to my fellow Hoyas. Which potty will receive my coveted 4E Best Bathroom Award? Read on to find out.

Lau’s bathrooms provide a lovely sanctuary to quietly cry about your imploding schedule and upcoming midterms. However, if you glance at the back of the stall door, you’ll notice an upsetting edition of the Stall Seat Journal. (The current paper is all about the calories that we drink and it may make you sad.) Still, I appreciate mystery Stall Seat journalists’ attempts to inform the Georgetown population about the dangers of Adderall and liquid caloric intake, so thank you. Overall, Lau library bathrooms are in decent shape: They’re not that pretty to look at but they are smart and we can all relate to intelligence while studying at Lau.

The bathrooms in Leo’s are generally super clean because nobody uses them. They’re the perfect refuge to duck into while avoiding that person you always see in Leo’s who says he knows you but you don’t seem to recall. Just don’t sit in there and eat your lunch. If none of your friends are free to eat, go sit by yourself: It’ll build your character. Or you could sit with me! I’m such a good friend and I’ll tell you about bathrooms and other interesting places on campus. If you do decide to sit by yourself, please don’t take a big table. Then I just might have to send you back to your toilet seat. Which, as I mentioned earlier, is super clean.

There’s a weird gaping hole in the wall of one of the bathrooms in the ICC, but there’s fun writing on the stall doors! In other words, I have a lot of mixed feelings about this one. These lavatories can also get insanely crowded between classes and they’re very small, so avoid walking in them with a large backpack.

Stunning. Five Stars. I expect nothing less from the business school. However, I would like to mention that the paper towel dispenser gives a sizably longer ration than any other building on campus and that’s so not green, MSB.

Mine. Oops, sorry. I live in VCE so I happen to have my own personal loo. It’s super convenient and there are even rubber duckies. In terms of public bathrooms on campus, though, basically stick to the newer buildings to find nicer bathrooms. It makes sense. So don’t be stupid.