It’s Humpday, and we at the Fourth Edition know exactly what that means: You have 300 pages of reading to do for class tomorrow, loads of responses to answer, bunches of notes to take and tons of stuff to do. You’re drowning in work … but you really aren’t doing any of it. In fact, you’re probably wasting away time watching some random series on your Netflix account. Enter 4E Flix. This new post is here to aid you in your inevitable procrastination attempts. This Wednesday, and for many Wednesdays to come, we’ll be featuring an addicting series and irresistible movie — both easily accessed on your Netflix account. That’s right, kids: You now can procrastinate and find shows on Netflix without even having to go through the random browsing, so curl up in your bed and get ready to get addicted.. You’re welcome. Without further ado, here are this week’s 4E Flix Picks:

According to the old poem, “Roses are red, violets are blue, sugar is sweet but revenge is sweeter.” This is obviously the case in ABC’s new hit series, which features breakout star Emily Van Camp. (Start drooling now) Van Camp plays the resourceful Amanda Clarke, a young socialite who returns to the Hamptons under a new alias, Emily Thorne, to seek revenge on the powerful people who framed her father for terrorism and ultimately caused his death. Things go awry when she develops a romance with Daniel Grayson (Josh Bowman), the son of the mega-wealthy Victoria and Conrad Grayson (Madeleine Stowe and Henry Czerny) — who happen to be Amanda’s biggest targets. Believe us, Hoyas, this show is like a can of Pringles: Once you pop, the fun don’t stop … and neither do the plot twists and steamy surprises. Once you begin watching this show, you’ll probably be wondering how revenge could be so, so delicious.

Keeping with the theme of thrills and revenge, one can’t help but become addicted to the three films in the Millennium Trilogy. Based off of Stieg Larsson’s internationally acclaimed novels, the series follows reporter Mikael Blomkvist (Michael Nyqvist) and hacker Lisbeth Salander (Noomi Rapace) through a series of events that include kidnapping, conspiracy, lies and cold-blooded murder. Gripping, chilling, and thought-provoking throughout, The Millennium Trilogy will keep you on the edge of your seat. Don’t be discouraged by the subtitles; these films are instant classics. (And just to clarify, they blow the American version out of the water.) (And just to clarify again, the books are always better.) 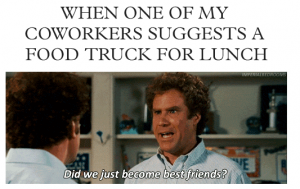 Unless you’ve been hibernating on Lau’s lower level without a computer or phone for the past month, you’ve been on #whatweshouldcallme procrastinating at some point over the past month. We love it because we can always relate to .gifs of drunk people on Bravo shows, old 90’s sitcoms and SNL skits. But, at the same time, #whatweshouldcallme seems to be focused a little too much on people in law school for us undergrads to handle.

Luckily for us, someone in the District has made a new tumblr page — a #whatweshouldcallme dedicated to D.C.-isms. And, since we here at 4E love D.C.-themed procrastination more than anything (besides puppies, grilled cheese sandwiches and food trucks), we figured we’d pass it along.

Since you need the motion to understand the humor, we’ve included the links below to some of our favorites. And even though we’re mildly upset no Georgetown humor has been included yet, we still find #whenindc mighty funny.