Justin Bieber has officially gone off the deep end, and I want to talk about it because I don’t want to do my philosophy reading. Instead, let’s philosophize about the Biebz.

I have to say that I have always been the first person to stand up for Bieber ever since I saw his performance at the AMAs in 2012. Here it is, in case you were wondering:

I was obviously persecuted and bullied for such a defensive stance on an oft-ridiculed celebrity; however, I am a strong-willed person so I would naturally whine back something like “but he’s so talented!” Which he is. Not as talented as Kanye West (another celeb that I just can’t help stand up for), but Kanye’s a genius so that’s different. Anyway, Bieber has been basically having a mental breakdown similar to the one I am having on Lau 4 because I’ve realized that I forgot how to do school. Thankfully, I haven’t assaulted anyone yet. He did.

Here at 4E, we’ve always been concerned for Justin’s well-being, and once again, we’re going to give our take on the things he should and shouldn’t be doing. I don’t have any expertise on his life, but I’m gonna discuss it anyway. Here are some of the things that J.B. did recently that make me worry:

1. Over 100,000 Americans are calling for his deportation. If that happens, he’s probably going to be like this:

2. He also grew a super sketch mustache. (See top photo.) I can’t even begin to deal with it.

3. Please note that he is wearing Invisalign in the picture at the top of this post. Lemme see yo grillz! I’m just kidding. Please put your grillz away. We don’t like them.

4. He’s been committing all sorts of crimes lately. Not okay.

5. This was his mugshot for the above-mentioned crimes. Also not okay.

This supports my theory that all celebrities are actually insane and we should trust none of them. Except Jennifer Lawrence and Alanis Morrissete, they’re awesome.

Sometimes, when you’re having a bad day, you start to ponder the big questions. The meaning of life, where you will be in ten years, what to eat for dinner, etc. All the head scratchers. So, like anyone asking the right questions, you probably end up finding yourself wandering down the mysteriously quiet hallway that makes up the philosophy department.

Turns out, you came to the right place. Philosophy professors have exactly what you need taped to their doors: some good ol’ philosophical humor. We’ve decided to save you the trip and post our favorites.

First there is Professor Linda Wetzel, associate professor and director of undergraduate studies in philosophy, who has a friendly reminder that you are not in this alone, at least if “this” is a newfound fascination with Kantian philosophy. 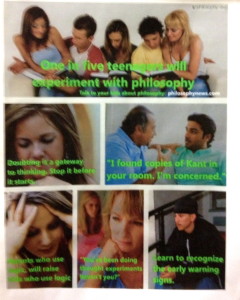 That, and the friendly reminder to check for aliens before crossing the hall. 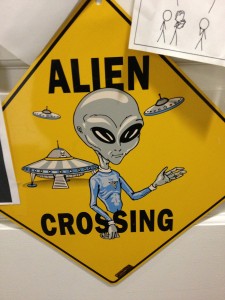 Oh, and don’t forget this one. It pretty much speaks for itself:

We also owe a big thanks to associate professor Francis J. Ambrosio for reminding us that this happens even to the best of us. 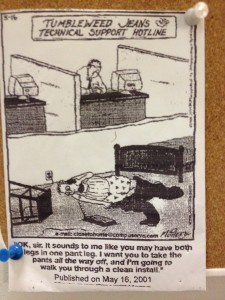 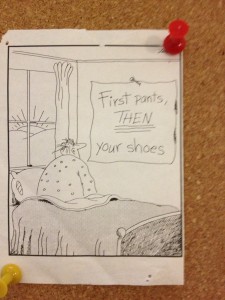 Last but not least, at the door of professor and Kennedy Institute Fellow Nancy Sherman, a healthy dose of “real talk” reminds us that everything will be okay … and that professors keep their doors closed for a reason. 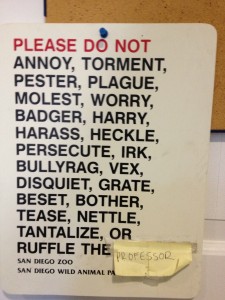 Photos: Julia Kieserman|The Hoya, And Be There

With midterms underway and piles upon piles of readings and problem sets to do, you might not be that happy with Georgetown classes. But according to The Daily Beast, there are classes here to change your mind! Georgetown even made it onto their Hottest College Courses list with our very own “Philosophy of Star Trek” course.

According to the list, Georgetown’s “philosophers” of Star Trek analyze what it means to be human, question the existence of free will and, obviously, go where no man has gone before (Ha. Get it?)

Other courses on the list included “Lady Gaga and the Sociology of Fame” at the University of South Carolina and “The Ugly American Comes Home” at the University of Chicago. So as you tirelessly prepare for those midterms, just remember you could be learning about the meaning of life from Spock himself in Philosophy of Star Trek. Who knows – maybe Will Shatner even comes to guest lecture.