The short-lived mystery about the origins of a band of tap dancers roving campus this afternoon has been solved.

The performances across campus were the final exam for students in “Theater and the Catholic Imagination,” a class taught by Fr. RIck Curry, S.J.

“With all the readings and the work they have to do in class, I wanted them to have the opportunity to do a theatrical performance.” Curry said. “[We] certainly don’t have time enough to do a play, so I came up with the idea to have a flash mob. And I’ve always wanted to teach them how to tap dance — this year it finally worked out that way.”

In the past, Curry said, the flash mob has been “modern interpretive” dance.

From 12:30 to 1:45 p.m., the group performed their routine twice in Leo’s (once on each floor), in front of Healy, twice in ICC, in Hoya Court and in the Leavey Center.

“It was fantastic,” Curry said. “People were cheering and yelling; they loved it.”

Participation in the flash mob was mandatory as was performing a monologue in class on the topic “What I Believe In,” which together will comprise the students’ final grades.

“The important thing is that you can find God in all things. That’s a Jesuit principle. What you try to do is show how thing can reflect the goodness of God,” Curry said. “Performance and tap-dancing can do that, too. It brought an amazing amount of joy to the students and to the audience.”

The students spent the beginning part of every class learning the routine, choreographed and taught by Kelly Kimball, head of the on-campus tap dancing group, Tappin’ Jacks.

Curry has been teaching the class, which is listed under Catholic Studies and counts for the theology requirement, for five years.

Kendall Ciesemier (COL ’15) was looking for a “fun and interesting” elective and said an older friend recommended the class to her. But the course’s relatively light workload and non-traditional final exams are undoubtedly appealing to students.

“It’s very much a performance-based class. So a lot of what we did was preparing for different performances. Like reciting a poem or [performing] group soap opera skits,” Ciesemier said.

Ciesemier says that though the class didn’t count towards her theology minor, it was simply “one of those Georgetown classes you had to take.”

Also, enrolled in the class are several high-profile Georgetown athletes, who impressed as they tap-danced their way around campus.

The six-foot-nine senior forward Mikael Hopkins, known for blocking shots and grabbing rebounds on the basketball court, was surprisingly fleet-of-foot as he shuffled and tapped in front of Healy Hall. So, too, were three of the men’s soccer team’s brightest stars: senior midfielder Tyler Rudy, senior goalkeeper Tomas Gomez and junior striker Brandon Allen.

“The athletes were terrific. The soccer team was particularly good. Not their skills so much but their enthusiasm. [Learning to dance] can be a little daunting, but their enthusiasm made it ok for everyone,” Curry said, adding, “Athletes love applause.”

Georgetown offers many classes that take a unique perspective of traditional topics, but “Theater and the Catholic Imagination” is probably the only one that requires a pair of tap shoes.

But for Curry, it’s not the actual tap-dance routine that matters; it’s what it stands for.

“It’s important that people start to express themselves more fully and more genuinely, and you can do that through teaching them how to dance. What they were doing was creating joy for themselves and others.” 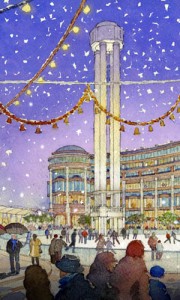 Well, Hoyas, we have good news and bad news. The good news is classes are done. The bad news is that finals haven’t even begun. That means that it’s time for papers, coffee, studying, (raging?), Lau, Lau, and more Lau. If you happen to surface out of your reading hole and into the real world in the coming days, here are some of our Best Bets for the weekend, study style.

Saturday:
If you have a free moment (read: free afternoon), mosey on down to Washington Harbour (a.k.a. the Georgetown waterfront) and spend some time at the brand new 11,800 square foot ice-skating rink. For $9 entry and a $5 skate rental, you’ll get bang for your buck at the rink—did we mention it’s bigger than the one in Rockefeller Center? Skate your way to happiness, kids.

Free at night? Don’t forget to stop by the Gonda Theater in the Davis Performing Arts Center to catch the final performance of A Civil War Christmas. It’s wintertime fun without even having to step foot off campus. Only $8 for students.

Sunday:
Didn’t see the Christmas tree lighting in Dahlgren Quad? Excited about Christmas trees in general? Stop by the Prez Rez at 1600 Pennsylvania Avenue and check out The White House Christmas Tree, a 40-foot Colorado blue spruce that has made D.C. its home since 1978. Also be sure to check out the nearby Pathway of Peace,” 56 smaller, decorated trees representing all 50 states, five territories, and the District of Columbia. Traveling to see these trees will definitely “spruce” up your study days. “Fir” sure. It’ll be “tree-ific.”

Sorry not sorry about the tree jokes. We hope to see you out in the coming days. If not, we’ll see you at Lau. Sadly.