Madeleine Albright — she’s just like us. Well, insofar as that she’s also a fan of Leslie Knope, the quirky former city councilwoman of Pawnee played by Amy Poehler on “Parks and Recreation.” The former Secretary of State and current Georgetown professor gave both Poehler and her beloved character a shoutout earlier this week in a tweet that would surely make Knope squeal with joy.

Congrats Amy Poehler on your #EmmysNoms! Can you get this to our mutual friend at @parksandrecnbc? pic.twitter.com/JFAqRgGHs2

Madeleine, you’re not alone. We love Leslie too. And Leslie, we agree, just keep doing what you’re doing — we just hope that autographed portrait somehow makes its way into the show’s upcoming seventh season.

Well, Hoyas, Valentine’s Day is quickly approaching. For some, this means a lovely evening with a significant other, but for others, it means dwelling on the fact that they will be alone this Feb. 14. The bad news is that reading this will probably not help you fall in love by Friday. The good news is that NBC’s hit series “Parks and Recreation” has coined an exciting new holiday to celebrate something everyone has: friends!

Galentine’s Day is Feb. 13 and serves as a chance for women to celebrate all the other fabulous women in their lives. If you’re a guy, don’t stop reading! I suggest you spend the day before Valentine’s Day with all the friends you appreciate, too.

Galentine’s Day is basically an opportunity to kick back with friends before all the pressures of dating or the unpleasant loneliness set in. Try catching a movie, eating out, ordering some takeout or maybe watching the Olympics. Do whatever it is that helps you relax and appreciate the people you are most comfortable with. Just try not to go too hard.

Also, don’t forget to check out the Georgetown University Women’s Center Galentine’s Day event on Thursday at 6:30 p.m. in Leavey 327 to really get in the spirit for this important holiday!

We agree, Leslie. We think Galentine’s Day is great.

And the countdown begins: Spring Break is almost here. Before we can head home or fly off to some tropical destination, we need to power through the rest of our midterms. But everyone needs a break every once in a while so we at 4E are here to provide you with some Netflix recommendations to get you through the next two weeks. Good luck everyone! 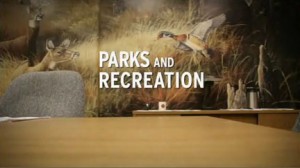 Are you in desperate need of a 20-minute study break? Then put away the books to watch an episode of Parks and Recreation. Although there are already five seasons of this comedy series, you don’t need to start from the beginning to fall in love with the show. Parks and Recreation, which uses a mockumentary filming style like in The Office, is about the lives of local government officials in Pawnee, a small town in Indiana. Amy Poehler stars in the show as Leslie Knope, a perky and enthusiastic bureaucrat in the parks department. Since there is a wide range of characters from Ron Swanson, the staunch libertarian, to April Ludgate, the sarcastic college student, every viewer will be able to connect with one of the characters in this highly addicting series. 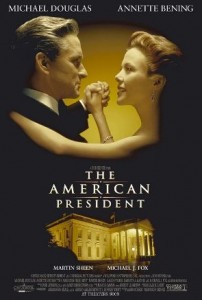 This 1995 romantic comedy-drama has all of the elements of a great movie: love, suspense, and Michael Douglas. And, to top it off, it’s set in the best city in the world. Douglas plays President Andrew Shepherd who attempts to win over environmental lobbyist Sydney Ellen Wade after the death of his wife. For those West Wing fans, many elements of this movie are depicted in the popular TV series. If only I could watch this movie for my US Political Systems class!

4E Flix is a weekly post designed to help the Netflixer with nothing new to watch. The Fourth Edition is not affiliated with Netflix in any way.