You may have heard that this Friday, the 20th of January, 2017, The Donald will be sworn in as the 45th president of the United States. You definitely have heard that this monumental day has sparked anxiety and arguments across our nation and our world. It seems that a vast array of the President-elect’s former statements on little things like (let’s just name the R’s for brevity’s sake)  Race, Russia, and Rosie O’Donnell, to name a few, have left sums of people experiencing a range of emotions from outrage  to fear, to complete and absolute bewilderment. Many of these people belong to organizations that advocate for human rights, but others are those who are simply able to acknowledge basic human rights and threats to them.

You need to know that this Saturday, the 21st of January, upwards of tens of thousands of women are expected to gather in D.C. for the Women’s March on Washington. The Women’s March is not about Trump. It is instead about the many identities he fails to represent in both his decisions and his lived experiences.

Whether you’re attending in D.C., one of the hundreds of sister marchers around the planet, or there in spirit and solidarity… 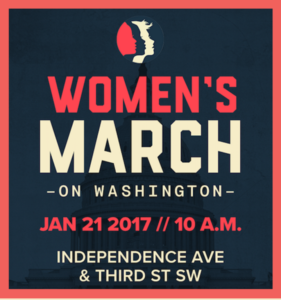 Here’s everything you need to know:

Who: Originally created by a retired grandmother in Hawaii, the Women’s March has been taken on be activists and celebrities and grass-root organizers across the country. Over 40,000 people are expected to be in attendance in Washington on Saturday and hundreds of other marches are set to run in solidarity.

Why: Leaders of the March state that its purpose is to send a bold message on the very first day of Trump’s presidency that people are watching him, ready to advocate for their rights, safety, health, and families. (A full list of the principles they seek to protect can be found here with definitions).

What: While it is called the “Women’s March,” the purpose of the March is to advocate for a wide intersection of identities (see Vox’s explanation of Intersectionality here) that have been threatened by Trump’s statements and decisions. All who believe in equal rights are encouraged to attend.

Where: The official March will be starting off at the intersection of Independence Ave. and Third Street S.W.
Sites for the 616 and counting sister marches around the country can be found here.

How: The March has secured permits and protection from the city and will be put on through the help of volunteers. For up-to-date events and notifications download the app!