We did not make this up, or at least, the questions. Pulled straight from the World Wide Web’s very own Yahoo Answers, 4E has picked out some classic questions from the “education” category. We tried to come up with an answer with common sense, but sometimes the questions are too much…

Are 60 seconds and 1 minute really the same?

No, absolutely NOT.  This common misconception is all part of the Illuminati’s plot to make us lose track of time as they slowly take control over our minds #conspiracy.  Rihanna writing that she’s “four five seconds from wildin'” is a perfect example of their work.  What does that even mean, and why is “wildin'”?  The world will never know, but luckily there are some people working to prevent the Illuminati from gaining complete control.  After all, we can thank Rebecca Black for helping us to accurately remember the days of the week!  Just keep reciting her insightful lyrics and remember ~they’re watching~.

K, noun, is a term that delves into the question of the existence of money. Where does it come from? Is it a figment of my imagination? How do I got more of it? Derived from the infamous Kardashian family, K is demonstrative of how money exists seemingly without grounding; it is something that just ~is~.

How do I get my sister not to go to college?

In researching the answer to this question, some sources actually provided reasons like: since she’s a girl she shouldn’t make money, a college degree would guilt her husband into letting her get a job (oh no!), and college will make her promiscuous (so truuuuu). In light of these answers, our answer is that your sister MUST go to college to combat these ludicrous ideas that say she shouldn’t.

The absolute best way to bring Jesus back from the dead is to wear your pajamas inside out, run around your dining room table five times, and leave a spoon under your pillow.  Ironically this also works for snow days!  If you’re not really feeling this incantation, we recommend leaving a milkshake outside on your lawn.  We’ve heard this method is known for bringing all the boys to your yard.

Are UC Applications due December 1?

Irrelevant because Georgetown’s application is due January 10th and that’s all you need to know.

Since 1975, women have been holding Take Back the Night events and combatting sexual assault, domestic violence, dating violence and sexual abuse. In 2001, Take Back the Night was officially established as a non-profit organization dedicated to those causes.

The Month of April is Sexual Assault Awareness Month, and as part of its campaign to end sexual and domestic violence, Georgetown University Take Bake The Night (GU TBTN) is holding Take Back The Night Week from April 8-12. To learn more about TBTN Week, sexual assault on college campuses, and most importantly, what Hoyas can do to combat gender-based violence, we sat down with Deanna Arthur (SFS ’14) and Kat Kelley (NHS ’14), Co-Chairs of GU TBTN, and Mary Toscano (COL ’14), Domestic Violence Liaison for GU TBTN.

What is GU TBTN and what is its focus?

“GU TBTN is an advocacy organization focused on fighting gender-based violence,” said Kelley. “Our main goal is to provide awareness and education about these types of violence. We really want to get people talking and thinking about these issues. We put on the Vagina Monologues every year, we do movie screenings and we especially put our focus on the month of April which is Sexual Assault Awareness Month.”

Currently, GU TBTN is leading numerous initiatives to raise awareness about sexual and domestic violence. According to Toscano, “We’ve done a lot of lobbying with other organizations for the reauthorization for the Violence Against Women Act (VAWA). We had a petition and, for us, it was really important to educate other students about VAWA. Another thing that we’re working on is an event specifically devoted to Domestic Violence that will take place during TBTN Week. We’re going to photograph people in Red Square holding signs and the whole purpose of the event is to incorporate people from different perspectives.” The event will feature members from GU Pride, international groups and other student organizations.

Though it is something that is commonly talked about, many people don’t know what sexual assault really is. What is the real definition sexual assault?

“Legally sexual assault is any unwanted sexual touching,” said Kelley, “It’s especially defined by the experience of the survivor. There’s not one situation or one act that defines it. If an unwanted sexual experience causes this type of trauma in the survivor, it’s something that needs to be dealt with legitimacy.”

Arthur mentioned that sexual assault is a prevalent issue on college campuses, including here at Georgetown. “The statistic says that 1 in 4 college women will be sexually assaulted, and for Georgetown, the statistic is similar,” said Arthur. “For adult males, it’s 1 in 33. There aren’t as many statistics for college age males—and sexual assaults in males are significantly underreported. That’s the other thing—the 1 in 4 statistic is just the statistic that has been reported. So it’s definitely an issue– even here. Many people think that here at Georgetown, we don’t have to worry about these things, ‘it’s something distant, it’s something foreign.’ But it happens and it happens in a lot of different forms… we’re not immune from it.”

When is GU TBTN Week, and what events will it include?

TBTN Week is going to be held from April 8-13 and our thesis for this year’s TBTN Week is ‘It’s Not a Woman’s Issue, It’s a Hoya’s Issue,’ said Arthur. Our goal is to reach out to different student groups and get them actively involved in this year’s events and raise awareness on campus about gender-based violence.

Here is the line-up for the week’s events:

Tuesday, April 9 Screening of The Invisible War and focus on rape in the military
“We really want to show that sexual assault has an effect on everybody, even places like the military, where you wouldn’t normally associate with sexual assault,” said Kelley.

Friday, April 12 Partnering with Health Education Services Hoya Health Hut which will involve pledging to not partake in sexual violence

What is ‘It Happens Here’ and how can Hoyas become involved with the event?

It Happens Here is an program that will feature the experiences of members of the Georgetown Community. According to Arthur, “We’ve reached out to social media to collect anonymous stories and insight from survivors, allies and bystanders on campus. In addition, we’ve developed a blog piece that we’ve released on the Georgetown Women’s Center Blog and Feminists at Large, and we’re also going post that on the Corp Service and Outreach Committee.”

“Most importantly, said Arthur, “we also have a Google Form to collect anonymous submissions for the event. Everything is going to go through our contacts in the Women’s Center and we want to reassure everyone that the whole program is going to be put together delicately. On the submission forms, we have a lot of links to the resources on campus. We really want people here to be aware of campus resources. We want to take these stories– whether it’s a survivor of an assault here at Georgetown or what it’s like to hear rape jokes or to be an ally or a friend—what they experienced, what they saw, what they wish they could have done better– and raise awareness on campus.

To access the Google Form and submit a personal experience, click here. Remember, all stories will be anonymous and handled with the utmost discretion.

How can we combat sexual assault on campus?

According to Toscano, some of the biggest problems with sexual assault today stem from societal stigmas and preconceived ideas. “We need to shift the focus on perpetrators, not victims,” said Toscano, “and we need to refocus the way we ask our questions and react to these events.”

“We also have all these societal myths,” said Kelley. “These include: ‘She was asking for it…’ or
‘He didn’t mean to…’ or ‘This type of thing only happens to women and only men perpetrate it.'” According to the girls, the most important thing when dealing with a sexual assault survivor is to believe them and reject preconceived myths about sexual assault.

Above all else, the girls wanted to spread the word about the wealth of resources on campus for both women and men. These resources can provide Housing and Academic Accommodations for survivors of sexual violence.

“What’s key is that survivors have a safe space,” said Kelley. “If they want to tell a friend, or a chaplain, or a professor, or someone they are close to. It’s all about doing what feels safe and comfortable for them.”

For more information on GU TBTN, TBTN Week or Resources on the Georgetown Campus, like Georgetown Take Back The Night on Facebook or email them at [email protected] 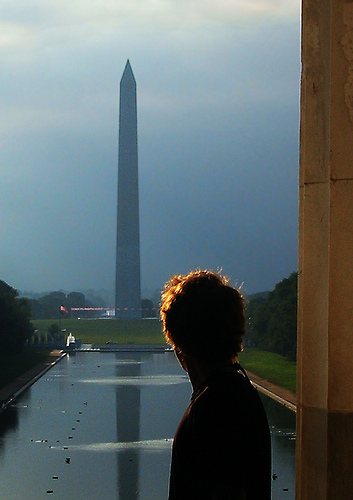 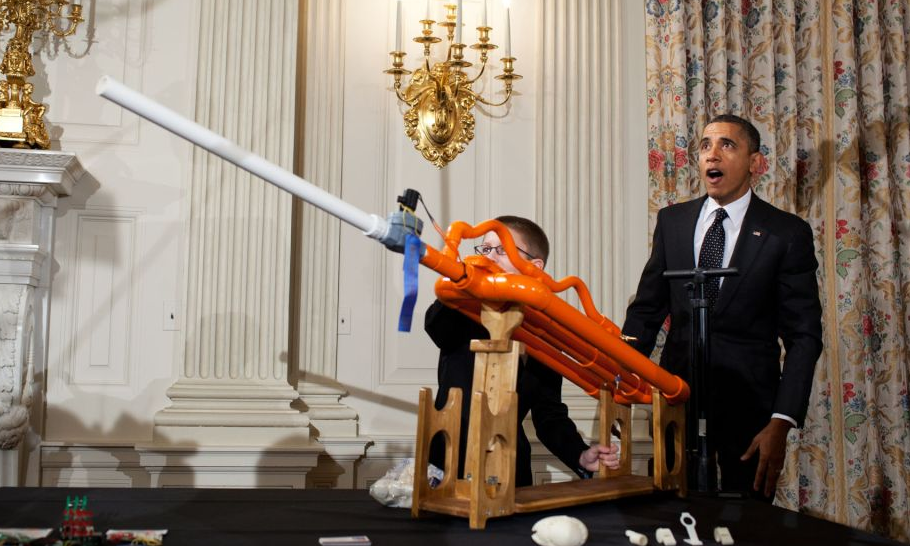 President Obama hosted a group of young students yesterday at the second White House Science Fair, where they showed off some inspired projects, according to InTheCapital. The innovations being featured at the event would have blown my entire grade school science fair out the water. Projects ranged from a device that removes ink from paper to a sugar packet that dissolves in hot water (eliminating a significant amount of waste) to alternative energy sources for cars.

We need more people, who can do math, design software, and create new applications for machines that have yet to come into existence. If we choose not to engage in fundamental research—not to pursue new technologies and systems, not to discover new properties of numbers and atomic structures,not to explore the oceans and outer space—we leave that work to others, to emerging countries, who have seen from the outside what science and technology can do for a society.

Other notable guests at the fair included Bill Nye the Science Guy (remember him?) and Jamie Hyneman and Adam Savage of Mythbusters fame.

Our favorite part? The pictures of Obama firing the marshmallow cannon designed by Joey Hudy of Phoenix, Arizona across the State Dining Room. The Washington Post has a gallery featuring more pictures from the event, and the White House blog has a video showing some more of the projects.