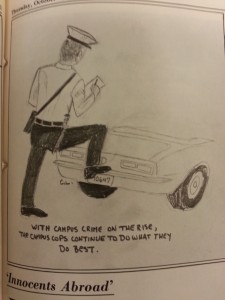 Most of us don’t think anything of swiping into our buildings — unless you forgot your GOCard in your room. But 24-hour security didn’t make its way into our dorms until about 40 years ago, after an assault on this day in 1971 (see headline below) prompted university officials to reassess security in campus residence halls.

On October 2, 1971, an unknown assailant held a Copley Hall RA at gunpoint after she discovered a robbery in the Residence Hall Office. At the time, Copley and Harbin lacked any type of security system, while other residence halls lacked 24-hour security. In the days after the assault, university officials led by then-Housing Director Suzanne Forsyth, called a series of emergency meetings to address security concerns. The meetings were led by dorm Housemasters and addressed concerns about student safety — Copley alone reported 14 burglaries and two assaults in September 1971.

Within two weeks of the assault, Copley had a temporary security system in place, but university officials had their eyes on larger plans. In an Oct. 15, 1971, article, The Hoya reported that university officials were examining “if a key-card system for entering is possible.” Furthermore, campus security officials were examining whether “defensive equipment, such as mace or night sticks, are needed for protection of security guards,” and was examining whether it could receive more funding to train officers. 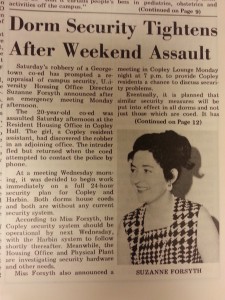 Other security measures included the installation of alarms on fire exit doors and increased lighting at the Medical Center.

The Hoya‘s editorial board had sharp-tongued criticism for the university’s shoddy security. The board lamented the incompetence of Georgetown’s 50-man security force, noting that “their Dick Tracy radios notwithstanding, the campus is just too big to be patrolled by policemen on foot.” (No DPS on bikes or in cars in 1971, evidently.) An editorial cartoon (pictured above) shows a campus security guard writing a parking ticket “with campus crime on the rise.” Walking from Reiss to Harbin was scary then, too, as “the walk between Reiss and Harbin … left late-night sojourners easy prey for attackers.”

It turns out October 1971 was an bustling time for the university. We discovered a few more gems of Hoya history in the Oct. 7, 1971, issue that broke this story. It  had just been announced that the Beach Boys would perform McDonough Gym that November. The Kennedy family announced a $1,350,000 grant to establish the Joseph and Rose Kennedy Institute for the Study of Human Reproduction and Bioethics, now known as the Kennedy Institute of Ethics. WGTB radio was in the midst of an 8-month hiatus as a result of disputes over student politics voiced on air. And, as revealed in a Letter to the Editor, smoking in Healy Hall classrooms was quite a nuisance.

This Day in Hoya History is a bi-weekly feature that delves in The Hoya’s archives to find the stories of Hilltops past. 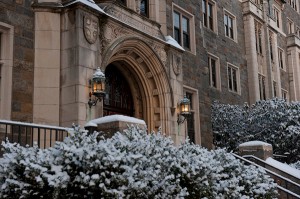