Enter to win one of ten admit-2 passes to see “T2 Trainspotting!”

These Run-of-Engagement Passes are good at any Landmark theater in the DC area, valid Monday through Thursday, beginning Monday, March 27.
Please email [email protected] with “T2 ROE Pass Giveaway” as the subject line to enter.

Don’t know much about “T2 Trainspotting?” Read on!

Twenty years have gone by since the original “Trainspotting” release.

Much has changed, but just as much remains the same.
Mark Renton (Ewan McGregor) returns to the only place he can ever call home.

There, they are waiting for him: Spud (Ewen Bremner), Sick Boy (Jonny Lee Miller), and Begbie (Robert Carlyle).

Other old friends are waiting too: sorrow, loss, joy, vengeance, hatred, friendship, love, longing, fear, regret, diamorphine, self-destruction and mortal danger. They are all lined up to welcome him, ready for him to join the dance.

Face your past. Choose your future. T2 Trainspotting.

Miley Cyrus isn’t one to stray away from polemics. Over the course of her short career, Miley has caused more than one mouth to drop with her wild partying and rebellious antics. Most recently, she’s been spotted twerking with Juicy J and hanging out with Justin Bieber and his leopard print Audi. And just to top things off, Miley’s released a shocking new single – and let me just say, “We Can’t Stop” definitively lives up to her recent Disney-sweetheart-turned-bad-girl reputation.

From the first few seconds of Miley’s new tune, it’s clear that Miley isn’t looking to revert to her more innocent days. The song begins with a voice-distorted, in-your-face, YOLO-generation statement: “It’s our party/ we can do what we want… we can say what we want… we can kiss who we want.”

As the song progresses, Miley makes it obvious that for her and her generation, nothing is going to change. “We can’t stop/ And we won’t stop,” she sings, referring to the over-the-top party lifestyle of her millennial age group. But it’s not the lyrics about partying that are causing “We Can’t Stop” to garner such a mixed response from listeners. (After all, we already know that Miley “Can’t Be Tamed.”) Rather, it’s the salvia-smoking singer’s drug references that are creating quite the sharp reaction to her newest single.

First MDMA and then cocaine? I didn’t see that one coming, Miley. Heck, even Kendrick Lamar is a bit shocked.

What do you think of Miley’s drug references? Think that it’s “her mouth and she can say what she wants to?” Or do you want it all to stop? Take a listen to the new single below and give us a holler in the comments!

In fact, before Coca-Cola was Coca-Cola it was Pemberton’s French Wine Coca. Yes, that’s right, it was a combination of alcohol and cocaine that promised to be a “most wonderful invigorator of sexual organs” (and you thought Four-Loko was extreme…).  It was marketed as a panacea—just in case, here’s the definition. The good folks down in Georgia, though, had the good sense to ban it. No, not because of its concentration of the now illegal class-A drug, but because of the alcohol. An early local prohibition marked the end of the Wine Coca era in Georgia. Try to find that kind of info in a textbook.

The Company replaced the alcohol with sugar syrup in 1903 and bada-bing, bada-boom, you have today’s drink. “But wait, 4E, what about 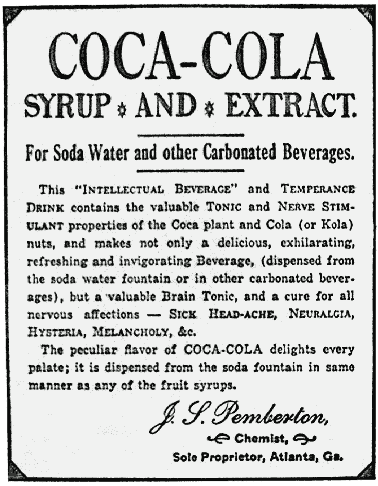 the ecgonine alkaloid in the coca plant?” (a.k.a “Are we still drinking cocaine?”). Rest assured, we are no longer drinking cocaine. If we were, Pepsi would be out of business. In the magical land of the New Jersey industrial landscape, there exists a chemical processing facility that extracts all of these psychoactive elements of the coca plant.  So yeah, our favorite soft drink has coca plant in it, but no more gutter glitter.

“But why, 4E, why did they ever decide to remove the ecgonine alkaloid (sometimes referred to as Merchandise No. 5) from Coke so early?” Well, indeed, cocaine did remain legal until 1914 (11 years after the change). Apparently the hypersexual side-effects of the cocaine produced a marked increase in interracial rape, which was something the racist (and, it goes without saying, anti-rape) turn-of-the-century society would not tolerate.

We find that one of today’s most beloved beverages is actually primarily a result of a localized prohibition and overpowering social pressures. Coca-cola has more history than we sometimes realize. Next time you’re poppin’ open a bottle of the caramel-colored sugary refreshment, think about it.

*Disclaimer: Just because Coke no longer contains Lady Snow does not mean it cannot be addictive.

*Simply Science is a reoccurring post that aims to make recent scientific discoveries accessible and applicable to the Georgetown student.