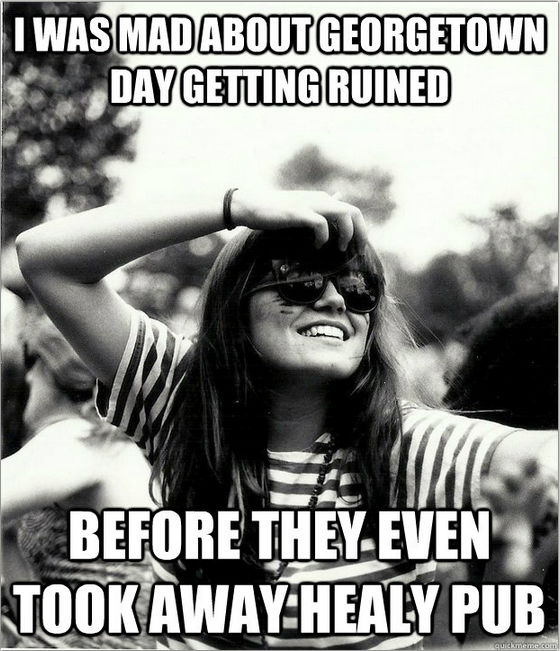 Since Tuesday’s announcement that Georgetown Day activities would be limited to Copley Lawn and fenced in with metal barricades, there’s been a fairly strong negative reaction from the student body (to say the least).

We’ve seen a new member of the blogosphere, Georgetown Day 2012, an anonymous “second-semester senior with entirely too much time on [his or her] hands,” making a case for the traditional freedoms afforded to the last Friday of classes.

The changes to Georgetown Day have also sparked the triumphant return of the King of Georgetown and a grassroots movement (via Facebook) to relocate the fun to the Leavey Esplanade. Within a few hours of its creation, the event had over 1200 attendees and another 3500 invited – nearly the entire undergraduate student body.

After seeing how quickly the event went viral, its creators (anonymous, and going by the names “Saxa Silence” and “Cura P. Workinggroup”) announced an effort to remind the administrators “that we’re civil, but we believe strongly that Copley Lawn should be open to everyone on Georgetown Day.”

Earlier this year, when administrators announced that Georgetown Day would be scaled back (meaning no beer garden and no bouncy houses), many students were upset. This led to the formation of a student planning group, and the involvement of many student groups with sponsored activities and stations throughout the day (who wants to go to “hat making in Red Square,” with me? Anyone? I’m serious!).

With less than 24 hours left until the big day, we’re interested to see how the administration reacts to the student response. Will there be any changes to the proposed schedule and security? Will all those hired security guards, DPS officers and student volunteers relocate to the Esplanade?

Regardless, stay tuned to 4E – we’ll have some tips and tricks for making the best of whatever Georgetown Day we wind up having. It’s still a celebration, after all!