Although midterms are starting to pick up steam, it seems like “Flu Szn” is at its peak since almost everyone you know is suffering from a terrible strain. The flu is awful, but looking past those sleepless nights where you lay in bed, shivering and coughing your lungs out,…

…having the flu is not so bad. In fact, here are the best things about getting the flu.

It’s every kid’s dream to skip school, and now your dream has come true. You don’t have to listen to annoying professors promote their own book that they made you buy for class. Finally, for one day, you don’t have to go to your Econ lecture and sit there confused, wondering what one could possibly do with an English major.

Having the flu means bed rest, and bed rest means binge-watching every TV show possible. Who knew it only takes 2 days, 14 hours and 24 minutes to watch all of Game of Thrones?

Want to lose weight? Don’t want to embarrass yourself at Yates? Well no need to fear, the newest diet trend of 2018 is here! With one dose of the influenza virus, you can get rid of the “freshman 15” in only three days!

The flu will make you experience your first weekend in college completely sober! What a strange feeling it is to not shove disgustingly flavored Burnett’s down your throat as you walk through a sweaty, fire-hazardous Henle while trying to breathe through all that mango-scented Juul smoke that may (or may not, who knows) give you cancer.

Despite all these benefits, the flu still sucks, and you can’t wait to start  “studying” again with your friends. Just make sure to wash your hands and don’t share drinks!

The start of the fall season gets everyone here at 4E just a little bit too excited. It’s the season of PSL’s, cozy flannels, UGG boots (we get it, we’re basic) and most importantly: fall TV shows!

Fall is the season of answers. You get closure for everything that happened during that summer finale and no longer have to re-watch trailers in a crazy attempt to find clues as to what’s going to happen in the next season.

With every season premiere however, comes the return of TV shows that can’t seem to get the hint. It’s their bajillionth season premiere, and their episodes are so predictable that you literally say the words as they’re coming out of the actor’s mouth. So in true 4E fashion, we’ve made a list of 5 TV shows that need to play their last finale and stay gone.

Bones: Bones is one of the 100,000 crime shows on TV that are the exact same except for the fact that this one focuses on- you guessed it- bones. To be honest I only started watching this show because the character Booth used to be on Buffy the Vampire Slayer (#tbt). Aside from the fact that the show focuses on bones and one of the main characters is really hot, I’m not sure why it’s been renewed for it’s 11th season.

The Real World: Raise your hand if you ever thought about applying for TRW once you turned 21. This mess of a reality show is one of the longest running reality shows in history. When it first came out (in 1992), it was considered to be a good conversation starter about “young-adulthood” problems like sex, drugs and drinking. But now we all know it’s only good for ruining whatever little was left of your professional life and getting you Instagram followers.

Maury: “You are NOT the father” are words that will forever be stuck in my head. If the first thing you watched on TV during the week wasn’t Maury, what kind of childhood were you living? This was probably one of the most scandalous shows I watched when I was little, filled with lie detectors, people fighting on stage and paternity tests galore. Once you grow up watching Maury, you begin to recognize the pattern and ultimately get tired of people going to a TV show to get testing done rather than just going to a hospital (adulting done right).

Jeopardy: I may or may not get a lot of slack for this, but Jeopardy is one of the most boring game shows I’ve ever watched in my entire existence. Alex Tribeck just isn’t entertaining to watch and this game never fails to make me feel like an idiot when I don’t know the answer to something. Plus, everyone knows that Wheel of Fortune is where the real fun is at. Plus, isn’t it always awkward when people don’t know what the answer is?

Supernatural: Just to be clear, I LOVE Supernatural. There’s nothing like a good Winchester demon hunting party. But when it’s been going on for 10 SEASONS, you might need to give it a rest. This show has touched upon everything supernatural (get it?), including demons, witches, werewolves, wendigos, spirits, ghosts…the list goes on. When you’ve done absolutely anything and everything, what else is there to cover? Someone should just give the Winchester brothers a break and end it on a high note, if that’s possible with a show about demons.

What TV shows are you guys tired of watching? Hopefully they don’t have 11 seasons worth of episodes…

As many of you may know, the 40th Anniversary Special of Saturday Night Live was last night. 40 years of such comedy legends as Amy Poehler, Will Ferrell, Eddie Murphy and so many others.

We here at 4E are huge SNL fans, and were delighted to hear about an app that was released just this past Thursday. The free app, simply called “SNL”, is available for both iOS and Android (sorry, Motorola Razr owners) and gives you easy access to over 5000 clips from 800 glorious episodes.

You can access these clips by searching for specific seasons or specific types of clips (parodies, music videos), and the clips themselves will rotate as new episodes come out. There are also SNL-themed emojis, which sound amazing.

So get this app, and get your fix of SNL before (or after) you check out the anniversary special tomorrow on NBC, starting 8:00 pm and lasting until 11:30 pm.

Thanks to Hello Giggles for the info!

We all love Netflix, the ultimate procrastination tool for any struggling college student. Every few months the website adds some awesome new shows to help us to continue our addictions.

Everyone with a brain (or a Facebook) knows that the biggest recent addition was that of Friends, the 90s show which combines friendship, love and random animals.

I mean, SO many memorable moments have occurred on this show. And now we get to relive them all from the comfort of your own couch/bed/Lau 3 table.

Here are some of my favorite moments, in gif form of course: 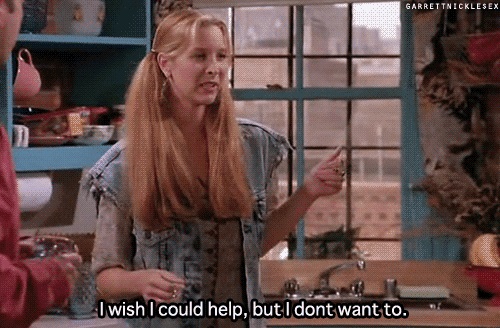 This show has been getting some serious traction; I have heard from 5 different people today that they couldn’t stay and chat because they had to “go watch too many episodes of Friends“. I am also suffering from this addiction and there seems to be no cure in sight.

Until now! 4E presents to you the “new” Netflix shows that you can watch to stop being obsessed with Friends.

Black Mirror. This is a show that I feel like everyone and their mother are talking about. Even though I have never seen it, I think it is about technology and Twilight Zone kind of things, mixed with social commentary.

Parks and Recreation. As the final season of the iconic comedy premieres tonight, there is no better time to catch up on all the laughs from the previous seasons. You don’t wanna be watching the last season and not catch on to one of the jokes because you forgot it (which is impossible but you get the point).

House of Cards. Okay so technically, the new season isn’t out yet, but in only a few short weeks you will be able to binge watch the most politically messed-up show on the Internet. For now, just check out the super dramatic trailer. It will kill you (not literally).

Archer. I personally have never seen this show but, as with any running television program, it probably is important to understand the background before diving head-in. Just a thought.

Arrested Development. Finally, you should totally watch (or rewatch) one of the best (and funniest) TV shows of this generation. This is especially important for those of you who have *gasp* never seen the show before. You need to get in on all the jokes, instead of staring blankly when your friends reference this show.

For the sake of journalistic integrity, I have to admit: I am writing this article after having watched eight full episodes of House of Cards within the last 24 hours. Yes, I too am officially a Georgetown student cliche. It’s inevitable. Eventually Frank Underwood gets to all of us. Some may call my recent Netflix marathon an achievement, but my history homework that was due today might disagree. Luckily, I now know that I am not alone.

InTheCapital recently reported that the majority of people living in the United States binge-watch TV shows, and Washington, D.C., is officially the home of the top binge-watchers in the country, with 88 percent of D.C. adults binge-watching TV episodes. (We tied San Francisco and Dallas for first place.) In addition, the study found that 66 percent of D.C. adults prefer to watch current season episodes as opposed to past episodes, once again ranking as the highest in the country. The study defined “binge-watching” as “watching two or more episodes of the same show in one sitting.”

So, what exactly are D.C. adults watching? According to the article, the top eight most binge-watched TV shows are:

Sad to say, my most recent binge show, House of Cards, failed to make the cut.

To learn more information on the survey, click here!