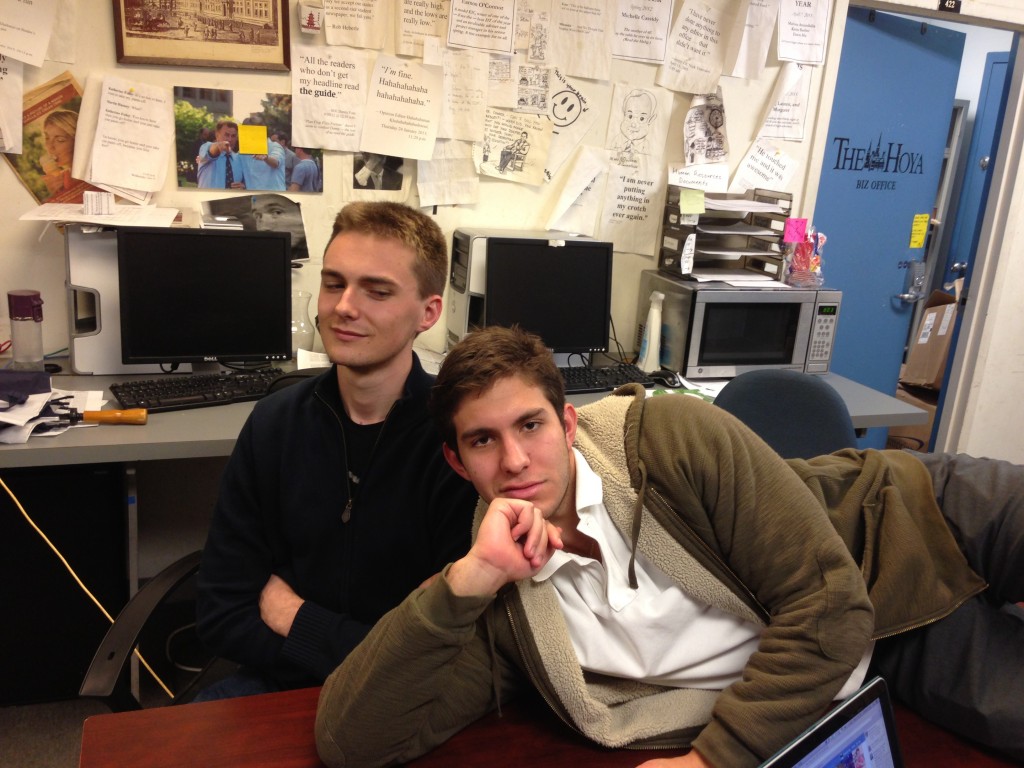 AJ: I spent seven shifts working on our Faces campaign and working with photographers.

Chris: AJ really went above and beyond the call of duty. And our Senior Editor (Leonel de Velez) was sick so we filled in for him and we took care of business.

Who in the office is most likely to invent something useless, and what would the invention be called?

AJ: Victoria is going to create some rom-com, sitcom thing. (Writer’s Note: When I asked what this sitcom would be about, Steven Piccione, Former Guide Editor, said that he could explain the plot because he was going to be in it: “The sitcom is about Victoria, her friend Glenda and me and how we don’t fit the stereotypes of the world.”)

Chris: (Writer’s Note: I don’t think typing this answer could do justice to this answer. Please listen to the following audio clip of the interview with Chris and AJ. Be sure to listen to the Hoya Staffers bantering in the background.) Here it is: The Hoya Height Chart. (Editor’s note: I’m really surprised that you couldn’t hear me screaming about how I wanted to be on the height chart.)

What is a secret hobby or interest that you have?

AJ: I like trying to surf. It never works out as planned.

What is the craziest thing that’s ever happened to you at the office?

Chris: Steven (Former Managing Editor) gets really paranoid when things are out of place, and I have this camera backpack, and I kept putting it in the doorway from the front room to the back room of the office and Steven kept on asking ‘Whose backpack is this?’ and he kept on moving it and whenever he turned away, I put it back where he doesn’t like it. And it was funny. Funny to me.

AJ: Last night, when Chris and I were covering the shift for Leo because he was sick, we invented the hypothetical scenario of texting Leo that the photo computers had spontaneously burst into flames to get Victoria (Managing Editor) into the back room so Pat (Board Member) could steal the broken table leg from under Victoria’s desk.

Writers Note: Finally, it is important to note that this is the second time in two months that Chris Grivas has received Staffer of the Week. When told about this prestigious distinction, he commented that it was, “Amazing. Oh my God. Amazing.”