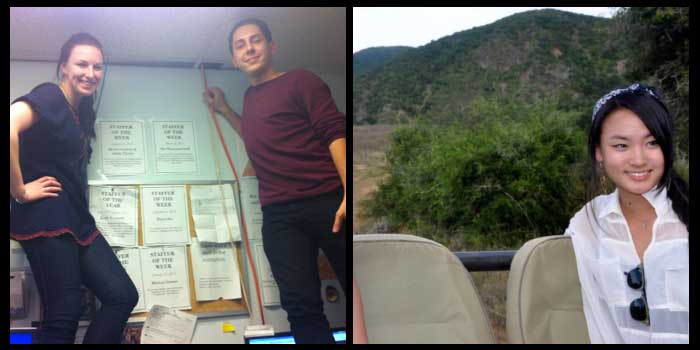 Lindsay: You’re lookin’ at it! I redesigned the layout for the blahg. (Writer’s Note: Lindsay requested this special spelling of “blahg,” and I also find it hilarious because she is going to have to edit her own interview.) (Editor’s note: it is currently making me uncomfortable to edit my own words.)

Michal and Addie: We forced people to judge other people and then compiled it so we could judge people in the least judgmental way possible. (Writer’s Note: The Personnel team actually conducted peer reviews, which provided feedback and constructive criticism for a large part of the Hoya Staff. The process took hours of hard work and professionalism!)

Lindsay: People sending me aggressive numbers of funny articles online and also not feeling like a dork for making grammar/typography jokes.

Michal: How great the people are. That’s why I’ve stayed around so much. We have personnel dinners and I love hanging out with them.

In your opinion, which person in the office is most likely to be president? Least likely?

Lindsay: Most likely: Wow. This is hard. This shouldn’t be this difficult! I’ll say Nicole Jarvis (Deputy Guide Editor) because people just gravitate toward her. She’s really deceptively cute, but I feel like she could be ferocious and a very strong leader. Least likely: Chris Grivas (Deputy Photo Editor) because he consistently spells my name wrong and that’s a skill you just need as president. Oh, also Ryan Bacic (Senior Sports Editor), because he’s too sassy for his own good.

Michal: Most likely: I could see Braden (Executive Editor) as president. (Note: Braden is not American and cannot be President.) But we’ve amended the Constitution before; why not now? Least likely: Zoe (Senior Layout Editor) for reasons that everyone in the office knows. (Writer’s Note: Actually, I’m pretty sure Braden is less likely than Zoe for obvious reasons. As in, his nationality.)

Addie: Most likely: Jon Rabar (Former General Manager) could convince you to vote for him or your life would end. So yeah… that. Least likely: Michal because he’s Polish. Like Alexander Hamilton, who would’ve been a great president but wasn’t American. (Editor’s Note: DANG IT, JUST KIDDING I CHANGE MY ANSWER TO JON RABAR.)

If you could have any superpower, what would it be and why?

Lindsay: I would want to be able to shoot Nutella out of my fingertips. I feel like I would just spread happiness/Nutella, which are synonymous, everywhere I go.

Addie: I would like my superpower to be whatever inborn power you get to be a wizard in Harry Potter, which would also allow me to freeze time and rob armored trucks. But why would I want to do that when I could just spontaneously generate cash as a wizard?

If you could have an alter ego (possibly an alias to hide the above-mentioned superpower), what would it be and why?

Lindsay: Beyoncé-Queen. I don’t need to explain that. (Writer’s Note: Lindsay said this answer in approximately 0.3 seconds. She has thought about this before.)

Michal: I had a couple fake names back in high school. People would recognize me in the mall, but they wouldn’t know my actual name. They’d call me David or Alex. So, I essentially already have alter egos. (Note: egos. Plural.)

Michal also insisted on ending the interview by saying, “No matter what, Personnel is always watching.” Hoya Staffers, beware.