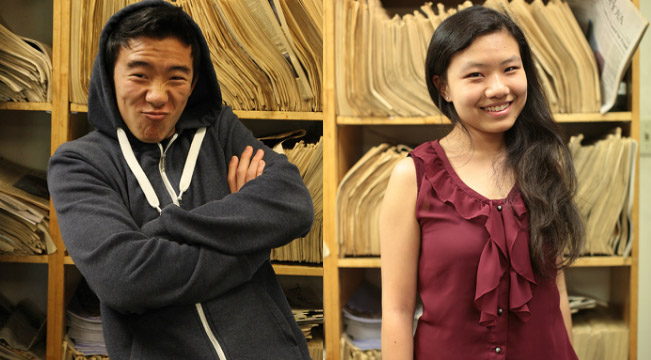 Once a week, The Hoya recognizes a staffer that has done a particularly awesome job – now you can get to know about them too. As part of our Leavey 421 series, we’ll be posting quick interviews with each Staffer of the Week! In a special turn of events– poetic justice? divine intervention?– one of our staffers is celebrating his birthday today. Happy birthday, Chris! Keep up your fantastic work for The Hoya!

Chris: I think credit first has to be given to the staff for doing a lot of work on the Faces campaign. All of the photographers and recorders worked hard in making sure we had enough people for the project. Also, Lauren Weber (former Chair of the Board) and Connor Gregoire (former Editor in Chief) for organizing the charge, while the tech team made sure the website looked sick. What I did was go through the pictures we had and make sure the matched the names and info, then resized the photos for the poster and online, and then laid them out while making sure the info and pictures were prepped and ready to go to the right people for them to do their part. It took a long time but it was worth it.

Taylor: I made and helped launch the website for the Many Faces project. I don’t know him very well, but I have a feeling Chris is going to be modest in his description, so I’m just adding this: Chris went through and made edits to every photo on the project multiple times so that they would all be formatted the same, without complaint. That’s 224 photos, and he finished everything in a day, which is simply amazing. He also offered to come to the office to help find files I needed at the last minute, and was up until 3am the night before the site launched, helping sort out last minute kinks.

Chris: My favorite part of working at The Hoya is simply the people. While it’s cool to be able to cover cool speakers, interesting events and shoot basketball games, it’s the diversity and the personalities of the people on The Hoya that make it so much fun. I consider many of the people I’ve worked with my close friends and I’ve learned and grown a lot because of them. When you end up spending 20 or more hours a week with these guys, it’s impossible to not appreciate what they’ve done and their impact on you.

Taylor: The people! Everyone is fun, quirky and wonderful to work with. Also, someone always brings some sort of gummies to the meetings…

What was your favorite part about working on the Faces project?

Chris: My favorite part was working with Connor and Lauren on Sunday night until 6am laying out the posters and Facebook-stalking people to make sure we got the right person. It definitely felt like old times in the office when we were all in editor positions.

Taylor: The Faces project was definitely a great learning experience. I got to work with a lot of unfamiliar web-making code that I honestly still don’t completely understand, and I also got to meet a lot of great people in the process. Moreover, I pretty much just implemented the best stalking tool invented since Facebook… I’m going to have a lot more of those awkward “I-think-I’ve-seen-you-before-but-I-have-no-idea-where” moments after scrolling through all those photos and names.

As you probably already know, Hunter Main is our new Managing Editor, and you were his first selections as Staffers of the Week. How would you describe #1- Hunter’s hair and #2 Hunter’s fashion sense?

Chris: I must say, Hunter’s hair has a very nice “swoosh” to the side that very appropriately fits his fashion sense. Of course, I have no sense of fashion so I think Hunter’s fashion will always beat my laid-back Cali-ness.

If you had to make a movie about The Hoya office, what would it be called, who would you cast – and why? (Author’s Note: this final question was slightly altered for Chris and Taylor. Though a bit different, their answers are nonetheless thoroughly entertaining and long.)

Chris: If I had to name The Hoya movie, I’d call it “The Black Hole” because you enter the organization as a bright-eyed, bushy-tailed freshman, eager to take on whatever the editors give you. Then, by the time you transition out, you feel like the life has been sucked out of you because of all the work you’ve put in it and realize you feel empty inside without The Hoya filling that void.

Since I’m old, I am going to cast the senior eds that I worked with:

So for EIC Connor, I would cast Danny Tanner from Full House as since we would always call him “Dad” in the office and you would hate to disappoint him.

Opinion Editor Katherine Foley would be Kate Middleton, cause Katherine is the Duchess of Delaware.

Executive Editor Upasana Kaku would be Michelle Rodriguez because she is a boss and can dole out the pain if you didn’t do what you were supposed to do.

Managing Editor Suzanne Fonzi would be Pam from The Office cause she was the voice of reason when the office got rowdy.

Campus Editor Mariah Byrne would be Claire Dunphy from Modern Family because she’s always on top of everything when taking care of the section.

City Editor Sarah Kaplan is Katie Couric cause she always got down to the bottom of those stories.

Layout Editor Remy Samuels would be Julia Child/Martha Stewart cause seriously, the things that Remy makes are literally heavenly.

Sports Editor Pat Curran would be Seth Rogan cause both are lovable guys who love to make jokes.

Guide Steven Piccione would be Adrian Monk cause he seems to always have a solution to a problem while liking things a particular way.

Copy Chief Sam Randazzo would be Heidi Klum cause her fashion sense is ridiculously awesome.

Blog Editor Michelle Cassidy would be a llama, cause she is one.

And Jon Rabar would naturally be James Bond. But not a Daniel Craig James Bond, more like Sean Connery James Bond, because Jon is more of a suave Bond than your rough-and-tumble Bond.

If you had to make a movie about The Hoya office, what would it be called, and which celebrities would you have play Danny Funt and Mary Nancy Walter — and why?

Taylor: Umm… some sort of musical comedy, maybe titled “The Publisher and the Published?” Also disclaimer: I stink at matching people to celebrities, so I’m just going to go with Daniel Radcliffe and Jennifer Lawrence. (Editor’s note: this is beyond hilarious to me).