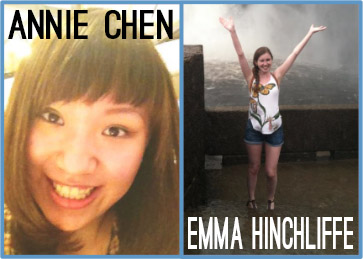 This week, two staffers went above and beyond the call of duty to obtain the glorious Staffer of the Week title (and the even more coveted Fourth Edition interview). Read what they had to say here:

Names Annie Chen//Emma Hinchliffe
Positions on The Hoya Staff Writer and News Assistant//Campus News Editor
Schools SFS//College
Years 2015//2015
Majors International Political Economy//Government
Hometowns Taichung, Taiwan (where majority of Life of Pi was filmed, hooray!)//Glen Ridge, NJ
What did you do to earn Staffer of the Week?

Annie: I’m not entirely sure … I missed the staff meeting – I know, right?! The one meeting I don’t go to … But I suspect that maybe because I went to all the GUSA election information sessions, debates, town halls and spent like 1,000,000 hours talking and stalking the candidates for the past two weeks. Also I’ve stuck with the GUSA beat for almost a year and a half (It could be a record).
Emma: I put together our coverage of the GUSA campaigns, elections and craziness for the past couple weeks.
What’s your favorite part about working for The Hoya?
Annie: Assassin season, for real. (Writer’s Note: during the spring semester, The Hoya Office engages in a bitter war of Assassins. Hoya staffers receive hit lists and must eliminate their “targets” with squirt guns, all while watching their backs and not getting hit themselves. Personally, I am still angry at my editor, Lindsay Lee, for killing me on Lau 2 last week.) (Editor’s note: GET OVER IT, KP.) My first target last year was Connor (as in, Connor Gregoire, former Editor-in-Chief) and I will never forget his expression when I splashed him. I had never talked to him or met him before then, so his face was full of disbelief and confusion. He tried so hard to act like it was no big deal and congratulated me and shook my hand and said “Nice to meet you.”  It just shows how awesome people who work for The Hoya are. But on a more serious note, my favorite part is writing campus news, being able to meet different students that I wouldn’t have otherwise met and learning about stuff students are doing to shape Georgetown in so many exciting ways.
Emma: When Braden (Executive Editor) orders a dozen Wisey’s cookies for delivery (but not when they’re oatmeal raisin).
If you had to pie someone in the face in the office, who would it be and why?
Annie: Braden, because I love how he always pronounces my name as “AHHH-nnie.” for no reason. But I always feel secretly bubbly and happy when I hear it (will Braden think I’m weird if he reads this?), so I think I’ll pie him with a sweet sugary strawberry flavored pie to express my secret crush for the way he calls my name.
Emma: Danny Funt (Editor-in-Chief), obviously. I hear his hair’s insured for $10,000.
What is your weird hidden quirky talent?
Annie: I can eat/have eaten the Chicken Caesar Salad from Grab ‘N Go for a straight five days for both lunch and dinner.
Emma: I’m really good at sleeping. It’s a special skill.

If you could name a beverage after yourself, what would it be called and what would it taste like?
Annie: Wait, I don’t get it. If it’s named after myself wouldn’t it just be called Annie? Why do I need to make it a name again? I guess it’ll be pretty tasteless in the beginning, because I’m really a boring and awkward person when I’m with people I don’t know well. But maybe bittersweet and sour if you care to take a few more sips because I can get really mean/sassy once I get to know people. (Note: I’m actually afraid to try this drink.)
Emma: Emmalasting Gobstopper and it tastes like rainbows and sunshine.