Once a week, The Hoya recognizes one or two staffers who have done a particularly awesome job — now you can get to know about them, too. Here’s our interview with Staffer of the Week, Ellen Zamsky: 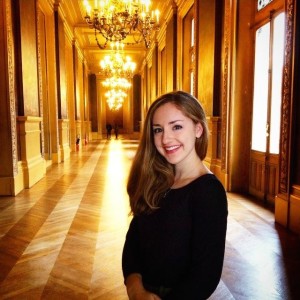 Why did you earn staffer of the week?
For being a resource to humanity! Slash overseeing this semester’s recruitment process. Hello and welcome to The Hoya’s 84 new hires!!

If you could be a veggie, what would you be?
Kale might be in vogue, but I’m big into beets. Beautiful in color, look pretty in a salad, nice and nutritional. I wouldn’t want to waste my short vegetable life as any less vibrant color. Plus, Dwight Schrute anyone?

If you had to live in one place on Georgetown’s campus, what would it be and why?
For starters, I am super partial to Darnall 5, my first home on the Hilltop. However, if I had free reign to establish a homestead anywhere I pleased on this campus, I would have to go with a suite in Riggs Library. I could be like Belle from Beauty and the Beast, minus the part where I’m held captive by a prince trapped in the body of a monster.

If you could be Jack the Bulldog for one day, what would you do?
Oh my gosh, I would definitely skateboard! I can’t skateboard as a human so it would be great to be transformed into an adorable canine who can. Also, I’ve never been Instagram video-ed by thousands of loyal fans, so that would be a nice experience to have.

How much do you miss Tuscany pizza?
Remember the size of those Tuscany slices? They were humongous. That is how much I miss Tuscany’s: a humungous, super-sized amount. With ranch.