Once a week, The Hoya recognizes a staffer that has done a particularly awesome job — now you can get to know about them, too. As part of our Leavey 421 series, we’ll be posting quick interviews with each Staffer of the Week! This week, Braden McDonald went above and beyond the call of duty and produced an exciting feature that, when being read, can only be described as pure ecstasy. 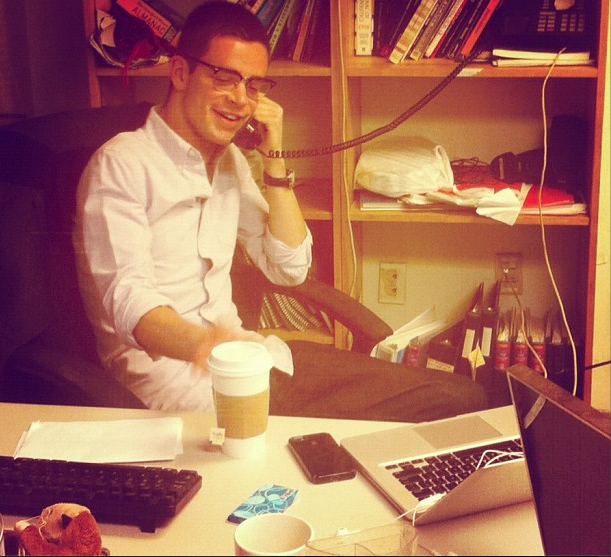 Why did you earn Staffer of the Week?

I think I earned it for writing the DT (double-truck, or main feature in The Guide) for this week. It was about MDMA — its highs and lows and its culture at Georgetown and colleges nationwide. I greatly enjoyed doing it. But Griffin Cohen, one of our freshman writers, did exceptional work interviewing sources because I’ve been so busy with the recruitment crunch, studying for the LSAT, etc. The feature simply would not have been possible without his industry.

What have you been most proud of while working for The Hoya?

By this point, my pride in The Hoya is just innate and unconditional, kind of like how one is patriotic to one’s country. It’s become part of me and my identity. But I think what I’m most proud of is our commitment as a mature, well-structured institution to make decisions systematically and responsibly, based on a set of guiding principles. We’re well run, and we’re accountable to our stakeholders.

You’re a fan of the Oxford comma. Defend its usage.

The Oxford comma is the difference between life and death, saint and pedophile, incest and … non-incest. A few weeks ago for the weekly trivia question (Writers note: Each week, Hoya Staffers receive a copy of the week’s board meeting minutes. At the end, Braden includes a trivia question that, if answered correctly, wins the answerer a prize!), I asked people to submit responses “create a sentence in which the presence of an Oxford comma is
essential to clarifying meaning/its omission might imperil the speaker.” I received some excellent — and illustrative — responses, which I’ll quote here:

I just had a riveting discussion about the Hindu gods, Elmo and Mario. – Zack Gordon

Let me introduce you to my parents, Joe and God – AJ Brown

Meet Enrique, my cousin and my fiancé. ;) – Mariah Byrne [the winner]

You’re on a plane sitting next to Derek Zoolander and Ron Burgundy. All of a sudden, the plane hits violent turbulence and the cabin becomes depressurized. Then, only two air masks drop down! One is for yourself, and now you must choose to save one outrageous movie character. Who gets the air mask and why?

Good thing we’re doing this interview via email because I had to Google Ron Burgundy. Yes, I live under a rock, and no, I didn’t really have a childhood. I did recognize Ron Burgundy when I Googled him, to my credit. He annoys the bejesus out of me so I’d happily let him die in those circumstances. Zoolander is adorable.

What was your favorite Disney movie growing up and why?

Believe it or not, I actually did watch some Disney films as a child. Maybe The Lion King, because I was obsessed with Elton John growing up. Or maybe 101 Dalmatians. I thought Cruella was just so fabulous. Or Peter Pan. There was something intoxicating about Neverland. Maybe I did have a childhood after all.

And now you have another Staffer of the Week award, too!