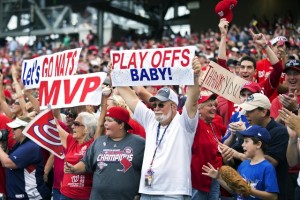 Today at 1:07 p.m., D.C. will see something it hasn’t seen since the Great Depression: postseason baseball.

It’s almost unbelievable. After languishing with mediocre baseball teams (or no team at all) the Washington Nationals were awesome this year. For those of you who aren’t sports fans, the Nats finished the regular season with the best record in baseball, clinched their first division pennant since 1981 (a full 24 years before they would move to D.C. from Montreal) and brought postseason baseball to Washington for the first time since 1933 — when the Washington Senators went to the World Series.

To get a sense of how big of a deal this season is for the Nationals, the franchise decided to Let Teddy Win during the mid-game Presidents’ Race — snapping a 538-race losing streak. (Because we at 4E love Teddy, we were ecstatic — but not quite as excited as these people, including John McCain.)

No matter which baseball team you support, postseason baseball — especially in a city as starved as this one — is exciting. (If you aren’t excited, read these articles by Washington sports writers). And, if you don’t realize how big this is for the District, a city council meeting will be postponed until the end of the game. Offices will cease to function as people come up with excuses to watch the game. But what’s the best way to make the best of all of the sporting excitement without trekking down to Navy Yard and Nationals Park? We’ve got you covered.

1. Show your Natitude. The Nationals organization has made a big push to grow their fan base in the D.C. area this year through their #NATITUDE campaign. The idea was to improve attendance at games and TV ratings. It worked. And no matter where you’re from, you can get in on the Natitude as well. Wear a curly “W” hat. Follow the Nationals on Twitter (they’ll live tweet the game so you can follow it during class). Get excited that, for the first time in 79 years, this city is home to a great baseball team.

2. Watch a game. Tomorrow’s game (much to the ire of Nats fans) is at literally the least convenient time. And it’s not being shown on a major network. So, you’ll have to head to restaurants with nice TV’s to watch it (unless you have a premium cable package.) Clyde’s and Rhino on M Street are probably your closest safe bets, but these restaurants held specials on Monday for the last game, so might have a bit more excitement there.

3. Find a local fan. D.C. baseball fans have been deprived of legitimate teams for years, so any conversation with them is probably going to make you want to at least root for the Nationals in this series.

4. Familiarize yourself with Nationals history and fandom. Because the Nats had to start up a new fan base in 2005 when they moved to D.C., they made it fun to follow games. The best non-sports related Nationals blog is Let Teddy Win. And, even though Teddy won a week ago today, they still follow everything about the Nationals that isn’t sports.

5. Ditch your hometown team. Sorry, Boston fans. The Red Sox were subpar this year. Sorry, Braves fans — my St. Louis Cardinals (also known as the Nationals’ foes in this series) beat you at home last Friday. Yankees and Orioles fans — your team doesn’t play until tonight. Whoever you support, I’m sure you can take three hours out of your life to root for the Nationals beginning at 1:07 p.m. today. They deserve your support. This city deserves your support. D.C. has been starved of good baseball for such a long time, so this is exciting.

(Disclaimer: Ignore this whole post if you are like me and you’re a Cardinals fan. Show your STL pride tomorrow, more than ever. I certainly will. Just know that it’s not the worst thing if the Cards lose this series, since D.C. baseball has been so sad for so long until now — you have to feel just a little bad for D.C. that St. Louis has won two World Series in the seven seasons since baseball moved back to D.C., while the Nats have suffered two 100-loss seasons in that time and just got their first ever winning season. Let’s make it 12 in ’12!)