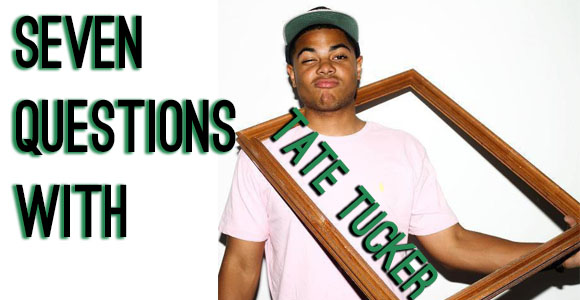 You may have seen Tate Tucker (COL ’14) perform at a Georgetown event, on YouTube or maybe just in the cubicle next to yours doing his homework. You may have caught him rapping for Lupe Fiasco in sociology class, or maybe you’ve seen his most recent success: his Harlem Shake video which hit one million views on Thursday and, since then, has received almost another 500,000 views in just two days. We at The Fourth Edition got the opportunity to sit down and talk with him about his life here at Georgetown, his musical inspiration and his upcoming ventures. Read on!

It was insane, but at the time I was having a pretty bittersweet week. I just had a ton of stuff going on in school and I was in New York the first few weekends here so I was just imagining myself failing out of school. And as soon as I got out of my exam I found out about the million views and it just felt so good. My director had been predicting and watching the view counts and texted me about it, it was crazy.

You kind of got to this Harlem Shake craze before everyone else! What do you think about this new fad?

I think it’s hilarious! The thing was, I met my current manager over this summer when he came to one of my shows and he was just like “hey I know what the next thing is, you gotta get on this before it gets big.” And of course he didn’t see it manifesting itself in the way that it did but he played the song for me and I just said, “woah, this is next level.” Anyway, we just felt very short changed when, after two months, we only had 20,000 views on the video, we thought it had a pretty good production value. So this is sort of the randomest turn of events and turned out to be super serendipitous and awesome. My production staff is just a group of really talented young directors [Todd Martin Films].

Is there anything exciting we can look forward to in the near future now that you’ve gotten your name out there more with this video?

Yes, yeah definitely! Very, very soon, I have a video coming out of me rapping with Afroman, because he came to Georgetown. I got to hang out with him and he gave a little Tate Tucker shout out, so that’s going to be cool. And then I was supposed to be in New York finishing a video this weekend, and we want to keep this momentum up. But I have half of a video shot called “Grill Walker” that should be being finished week after next and that’s going to be my acting debut as well!

Do you have any musical inspiration or role models?

People always laugh, but it all starts with Lenny Kravitz. He was my man and I’ve known his music since I was four. I just wanted to play the guitar and I couldn’t, so then I played the drums for like six years. I even grew my hair out. I just love Lenny Kravitz. He’s got a black dad and a white mom, like we’re the same person, and he’s just awesome. He’s like the hybrid of music that I love: his instrumentation, his song-writing, his respect for women while still being a loverboy, just all of that, I love how he pulls that off. So, he’s definitely a staple for me.

Then for current hip-hop, it’s all over the place. I don’t listen to as much hip-hop as people might think. I listen to like Otis Redding. But my parents have been a pretty big influence as well. My mom would have like “Gangsters Paradise” by Coolio in the mini-van and my dad would be playing like Talking Heads and it was just so eclectic. My parents actually met singing at Virgin Records, my mom was working on a start-up with Richard Branson. So I was just raised in a household of color, music and eclectic sounds but I’m not going to be the guy that just spews of the top ten artists. I like positive music, happy music and stuff like that. But in terms of rap music, I like it to be up-tempo. I’m a percussionist, not as much of a melody guy and I’m working on that.

How do you feel that being at Georgetown has affected your experience as a musician?

It’s kind of like the “grass is always greener” kind of argument. I was always kind of pissed I couldn’t drop out, you know? Like freshman year when I did the Lupe Fiasco thing and the video went really viral for a second, I was like “Dad, I can’t do school, this is too fun, this is what I love”. And he was just like, “shut up.” And he just kind of broke it down for me. He was like, “You are like every other wannabe rapper who hasn’t made it yet, without a degree. Nothing distinguishes you if you’re not here.” So, it’s kind of cool having this story, that this is like my identity: college-educated, but still pursuing this kind of thing. It keeps you grounded also, having a really realistic backup plan because you can’t just put all of your eggs in one basket. I love it at Georgetown, as well! Keeping my major (English) in the same direction, so it’s not completely unrelated. I’ve given up on sleep so I can do both music and school. There are some sh*tty weeks and some really good weeks. I can always sleep on the bus [to New York]! There are a lot of all-nighters in Lau but it’s rewarding.

So you’re a junior now, what are you looking forward to with the rest of your Georgetown experience?

I am just the biggest fan of Georgetown. I don’t really know why I applied here? I just blindly made it my dream school in junior year of high school and I have just had such a tie to it that I really want to soak it up. I want to get out of the bubble a little more, explore DC, hit up every museum [that] I haven’t. I’m also looking forward to getting a little more involved on campus, you know? I’ve missed so much, being away on weekends and so I’m excited to finally stay here, give back, help musically, advocate for things. I feel like I’ve kind of been neglecting that. Also getting my degree! Gotta make that happen.

Last night you performed at Cabaret, sort of a compilation of some of Georgetown’s best musicians. If you had the chance to collaborate or perform with any five people, dead or alive, who would they be?

Ooh, this is a good question. [Choosing] five is awesome, one is too hard.

So, I’ve been obsessed with this rapper, nobody really knows him yet, his name is KYLE. He goes by K.i.D. and he’s out of Southern California, Ventura. You’ve gotta check out his song “Keep it Real,” it just dropped and got 500,000 views in a week. He’s kind of a hybrid between Kid Cudi and Drake. Got that singy feel and he’s very himself. I’m very into artists who are very themselves. I also like to think about the chemistry I’d have with an artist.

I don’t know if I could handle Kanye yet, I feel like he’s a perfectionist and would just rip me apart, but someday.

Pharrell, I would love to work with. He’s just a really good, nurturing, producer. He’s really good with young artists.

Singer-wise, I’ve always really wanted to work with Childish Gambino, I feel like he’d just be the coolest ever.

Also Lana del Rey, I’ve always felt really hipster about her because I knew about her before she blew up. I was thinking of being “Tate del Rey” [since I’m from Playa del Rey], but then she took that.

And then Dr. Dre. I think I should be his next protege, I think we’d mesh really well. Maybe be the next Kendrick. I would love to work with him … and then eventually Kendrick too.

Is there anything you’d like to add or like our readers to know? (Editor’s note: Okay I know this is an eighth question, but technically it’s an addendum…)

Since we’ve started fresh, removed a lot of my old tracks, and sort of restarted with this whole Harlem Shake project, people haven’t really been able to hear my old stuff. So, the first Tate Tucker people hear is this sort of partier, superficial kind of boy. I had a girl come up to me after one of my concerts saying she had seen my Harlem Shake video and said she thought it was “interesting” and thought I was a “chauvinist.” Which is pretty funny because I’ve been a women’s-rights activist since the 7th grade. So we had this long talk, and what not. But it made sense: If I only saw my Harlem Shake video and didn’t know the angle at which we were going with it, which wasn’t serious at all … That’s just something I want to convey to people, that I have a lot more lyrically and I’m multi-faceted. You see me Thursday night through Saturday night, you’ll probably see “Harlem-Shake-Tate.” But Monday through Thursday I’m a nice, caring, conscientious, socially-aware guy.

One Reply to “Seven Questions With Tate Tucker”