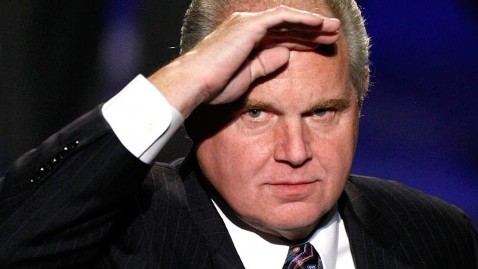 Georgetown law student Sandra Fluke was prevented from speaking at a Congressional hearing about the Obama administration’s contraception policy on February 16, and she has since been an object of controversy — blasted by conservatives, while supported by women’s rights activists and liberals. While Fluke did end up speaking at a Democratic hearing about the matter, her critics have grown louder over the past few weeks, while her supporters have galvanized in solidarity.

This week, conservative pundit Rush Limbaugh took the criticism beyond Fluke herself and extended it to all of Georgetown’s fine women. After a fresh tirade against Fluke, where Limbaugh called her a “slut” who “wants to be paid to have sex,” Limbaugh offered to pay for Fluke’s contraception — in the form of aspirin to be stuck in between her knees. He then extended the offer to the entire university:

“A Georgetown coed told Nancy Pelosi’s hearing that the women in her law school program are having so much sex they’re going broke, so you and I should have to pay for their birth control. So what would you call that? I called it what it is. So, I’m offering a compromise today: I will buy all of the women at Georgetown University as much aspirin to put between their knees as they want.”

For her part, Fluke responded in defense of our beloved Georgetown:

“I thank the thousands of women and men, including members of Congress, Georgetown University students and faculty, and total strangers of all political stripes across the country who have offered kind words and support following recent egregious personal attacks.”

To see for yourself, check out Limbaugh’s offer and responses to his comments.  Personally, I say buy all the aspirin you want (but, please, don’t stick it between your knees) and send the receipts to Limbaugh’s office.

Update, 2/2/12 3:49 p.m.: The Hoya talked to Fluke about Limbaugh’s comments; see her response here. President DeGioia also released a statement in response to the situation, which can be found after the jump.

Dear Members of the Georgetown Community:

There is a legitimate question of public policy before our nation today.  In the effort to address the problem of the nearly fifty million Americans who lack health insurance, our lawmakers enacted legislation that seeks to increase access to health care. In recent weeks, a question regarding the breadth of services that will be covered has focused significant public attention on the issue of contraceptive coverage.  Many, including the United States Conference of Catholic Bishops, have offered important perspectives on this issue.

In recent days, a law student of Georgetown, Sandra Fluke, offered her testimony regarding the proposed regulations by the Department of Health and Human Services before a group of members of Congress.  She was respectful, sincere, and spoke with conviction.  She provided a model of civil discourse.  This expression of conscience was in the tradition of the deepest values we share as a people.  One need not agree with her substantive position to support her right to respectful free expression.  And yet, some of those who disagreed with her position – including Rush Limbaugh and commentators throughout the blogosphere and in various other media channels – responded with behavior that can only be described as misogynistic, vitriolic, and a misrepresentation of the position of our student.

In our vibrant and diverse society, there always are important differences that need to be debated, with strong and legitimate beliefs held on all sides of challenging issues.  The greatest contribution of the American project is the recognition that together, we can rely on civil discourse to engage the tensions that characterize these difficult issues, and work towards resolutions that balance deeply held and different perspectives.  We have learned through painful experience that we must respect one another and we acknowledge that the best way to confront our differences is through constructive public debate.  At times, the exercise of one person’s freedom may conflict with another’s.  As Americans, we accept that the only answer to our differences is further engagement.

In an earlier time, St. Augustine captured the sense of what is required in civil discourse: “Let us, on both sides, lay aside all arrogance.  Let us not, on either side, claim that we have already discovered the truth.  Let us seek it together as something which is known to neither of us.  For then only may we seek it, lovingly and tranquilly, if there be no bold presumption that it is already discovered and possessed.”

If we, instead, allow coarseness, anger – even hatred – to stand for civil discourse in America, we violate the sacred trust that has been handed down through the generations beginning with our Founders.  The values that hold us together as a people require nothing less than eternal vigilance.  This is our moment to stand for the values of civility in our engagement with one another.