LADIES AND GENTLEMEN, CAN I PLEASE HAVE YOUR ATTENTION … I’VE JUST BEEN HANDED AN URGENT AND HORRIFYING NEWS STORY …

The News Team is indeed assembling … but this time, far from sunny San Diego. On November 14th, Washington’s Newseum will begin featuring an exhibit dedicated to the the beloved comedy “Anchorman: The Legend of Ron Burgundy”. The exhibit, quite fittingly, will be titled “Anchorman: The Exhibit.” In anticipation of the movie’s upcoming sequel, the exhibit will be open through August 2014 and will display the costumes worn by the Channel 4 News team, some of the original props and a re-creation of the KVWN-TV desk.

Commentary by none other than Ron himself will lead you through the exhibit, as you lay your eyes on the jazz flute that he played so wonderfully to win over Veronica – or as you witness, with your own eyes, Brian’s coveted Sex Panther. For all the aspiring journalists out there, the exhibit allows you to take part in joining the team by participating in a broadcasting simulation with Mr. Burgundy.

The Newseum is all it’s cracked up to be, and with this exhibit coming next week, it’s about time to cross it off the bucket list. Everybody loves “Anchorman”, or at least yielded a smile at some point during the absurdity. So bring your Brian, your Champ and even your Brick … and head on down to the museum.

And remember, you stay classy … Georgetown. 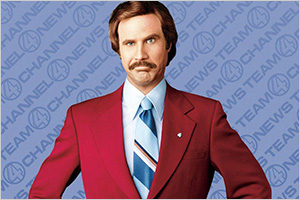