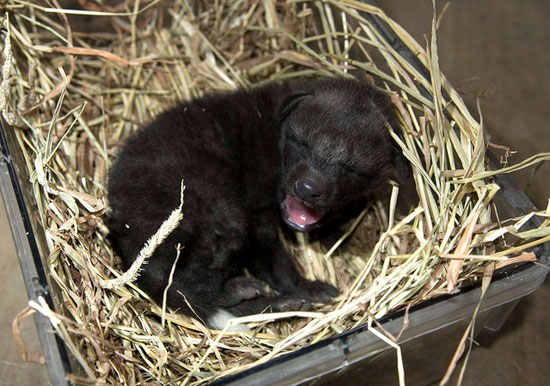 We’ll take any excuse we can get to write about baby animals (and wolves no less — fitting for the upcoming premiere of the second season of Game of Thrones), and this is a fun one. Back in January, four maned wolf pups were born at the Smithsonian Conservation Biology Institute in Virginia, and the National Zoo is putting their names up to a vote.

Two of the four pups (one male and one female) still need names, and the poll to decide what they would be opened yesterday on the Zoo’s Facebook page.

Potential names were selected by the pups’ caretakers “in an attempt to reflect the animals’ personalities, natural history and range.” The options for the male pup are Canastra, Cerrado, Rocko and Timido, while the female could be named Bela, Estrella, Pinga or Terra. The potential names are all Brazilian Portuguese, with the exception of “Rocky,” which was the nickname of one of the researchers’ fathers.

The pups are all healthy and feisty, according to veterinary technicians at the SCBI. Maned wolves are native to central South America, and are threatened in the wild.

Voting will only be open until noon on Friday, March 30, so if you want to play a part in naming these little guys act quickly.