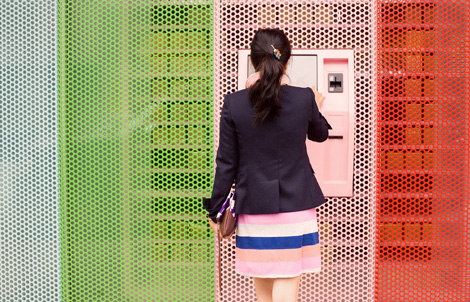 I know what you are thinking right now. How in the world could Georgetown, a neighborhood that is more saturated in cupcakes than any other place in the world, possibly support MORE cupcakes?

Sprinkles has your answer. Install a 24/7 “cupcake ATM” so anyone can satiate their sweet tooth at any time, night or day. It sounds like futuristic ploy to make us fat. But it’s not. It’s just a way to satiate your late night sweet tooth. Coming this August, Sprinkles will have a full-service, 24/7 cupcake ATM in front of its store at 3015 M Street.

Georgetown won’t house the first cupcake ATM in the world, though. That honor belongs to Sprinkles’ Beverly Hills ATM, which opened this past March.  Nor are we the only additional ATM. Sprinkles is installing others in New York, Chicago and Houston.

According to The Washington Post, the cupcake machine costs roughly $100,000 dollars, but that’s because of the fancy robotic arm, video camera, touchscreen and pastel-colored decorations. Besides, even though the Beverly Hills machine just opened up four months ago, it sells 1,000 cupcakes a day, meaning the machine has just about paid for itself already. Besides the robotic arm, touchscreen and video camera, the ATM is linked to a cupcake vault, which can hold up to 600 cupcakes at a time and is restocked several times a day so cupcakes can stay fresh.

ATM cupcakes will cost $4, instead of the typical $3.50, which Sprinkles says is a packaging surcharge. (Also, wouldn’t you be willing to pay a little extra to order from a robotic arm at 3 a.m.?)

So, could cupcakes become the new drunk food on Saturday nights, replacing the likes of Tuscany and Quick Pita? Or could the ATM become as much of an annoyance as the never ending line along 33rd Street in front of Georgetown Cupcake? I guess we’ll find out in August.