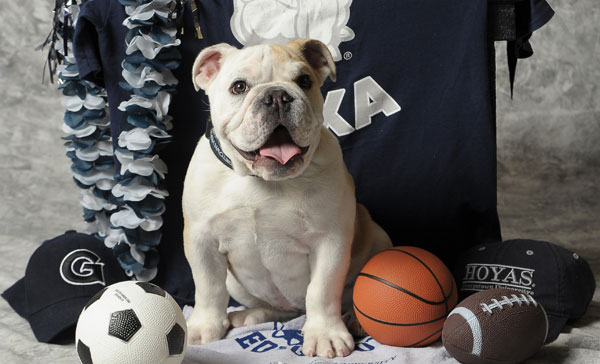 A new bulldog puppy is headed to the Hilltop to begin training to become our university’s most beloved mascot. The new Jack, known as Jack Jr., or J.J., will arrive on campus the afternoon of April 13 to begin his training to eat boxes on the floor of the Verizon Center, among other things.

J.J. is a gift to the university from from Georgetown parents Janice and Marcus Hochstetler, whose children Nathan (COL ’12) and Rachel (COL ’13) are Georgetown students, according to the University.

J.J. will be the sixth bulldog to serve as the university’s bulldog mascot, and will be replacing our current 9-year-old bulldog, who, if you’ll remember is suffering from a torn doggy-ACL. Current Jack will undergo surgery in April, but will return to his work during the fall sports seasons.

Keep following 4E for more updates on J.J.’s journey to the Hilltop from L.A. and for updates on his training!

Update: Now with adorable footage of 2-month-old Jack mugging for the camera.

One Reply to “Meet Our Future Mascot”