On March 24th, many students awoke to find their Facebook newsfeeds covered in links to articles about Proposition 8, DOMA and the recent demonstrations in front of the United States Supreme Court Building. These articles struck a chord with many students on the Hilltop due to the proximity of the protests, but this experience was amplified when some of the most iconic and widely circulated photos from the protest were those of four Georgetown students. Some of these pictures were featured on the front page of The New York Times, The Huffington Post, New York Magazine, Buzzfeed, The Vancouver Sun, The Los Angeles Times, and even several international newspapers including the cover of El Espectador. These four students, Alexandra Waldon (COL ’15), Hannah Hauer-King (COL ’14), Tim DeVita (COL ’14), and Dillon Brooks (COL ’15), were kind enough to answer my questions about their experience and their thoughts on the LGBTQ movement as a whole.

When Waldon and Hauer-King were asked to describe the general atmosphere of the rally they said in an email:

We arrived pretty early at around 7.30am and there were only a few protestors out, but it felt very much like the calm before the storm. We weren’t sure what to expect, so we started just chatting with reporters waiting on the crowds and witnessed the Westboro Baptist Church campaigners who there as early as we were. It was pretty shocking seeing the kind of posters and propaganda they were carrying.

The next thing we knew, it began to fill up with other equality supporters, and then the atmosphere was one of complete love and positivity. There was such a huge sense of community, unlike anything either of us have ever felt before, and such an array of generations and contexts; allies, young people, human right activists, anyone who had an interest or a dedication to promoting equality had a welcome place, and that was kind of fantastic.

I felt really happy to be there. It was both really emotional and really empowering in some ways as well. I feel as though the LGBTQ movement in general hasn’t gotten as much publicity as other movements because we are so small in proportion to the other minorities within the United States, and we don’t really have one key figurehead leader. Being there was really special, especially because the whole time I was there, I was texting a lot of my gay friends from all over the country and my gay brother and even though they weren’t there, it felt as though they were there with me. It really made me feel like change is happening.

Amidst all of this excitement, all four of them got swept up in that atmosphere of “complete love and positivity,” which was captured in the photographs. Many major publications joined the protestors and immortalized the moments of defiance. Out of what was sure to have been an innumerable number of photos of many different protestors, several photos of these students stood out. When asked about how it felt to see their pictures so widely publicized, Brooks remarked:

I’m still sort of in disbelief that the pictures blew up the way they did. Tim and I weren’t even planning on making out in front of the Westboro Baptist Church [protestors] but once we did, everyone around us went crazy. I think that the pictures are great because of the juxtaposition between the Westboro Baptist Church’s hate and the loving kiss between me and Tim, Hannah and Alex. I can’t wait to show my (very future) kids the picture someday. I feel like in 30 years this country will look back on the [way] in which the government treated LGBT rights with shame. 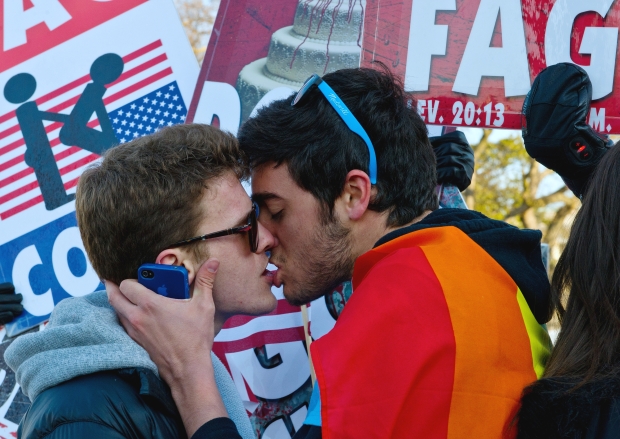 Waldon and Hauer-King described the moment in a similar manner of disbelief:

It was completely surreal, especially when looking back to those moments when we were taking the photos. What started as us wanting just a snapshot [for ourselves] on an iPhone of us sticking it to the man suddenly became this internet sensation. I remember having our friend take that photo in front of the WBC protestors, having them screaming homophobic slurs in our ear, and then suddenly looking up and seeing about 30 members of the press snapping our pictures and asking for commentary [see below]. It was completely insane, and we could have never anticipated the response it generated. 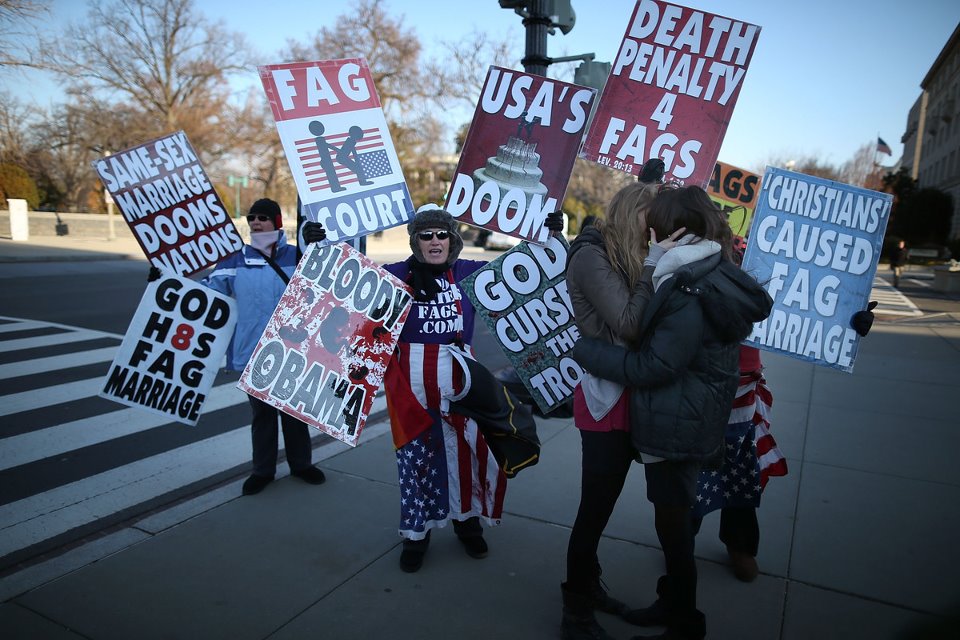 The [photo in The] NY Times [see below] was almost more special because it just a captured a moment which I think for us wasn’t about defiance but rather positivity and pride in being part of this movement. 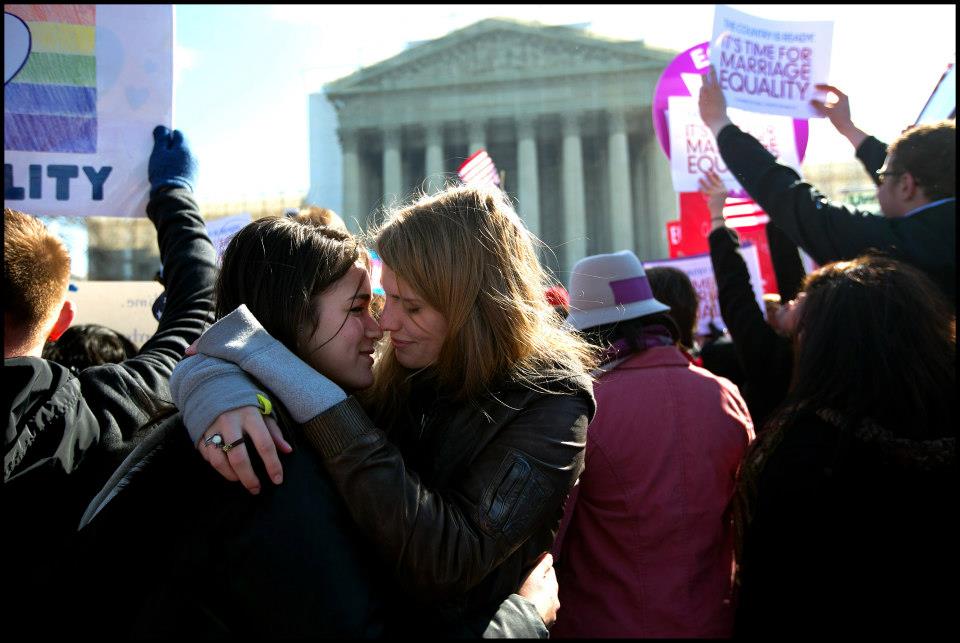 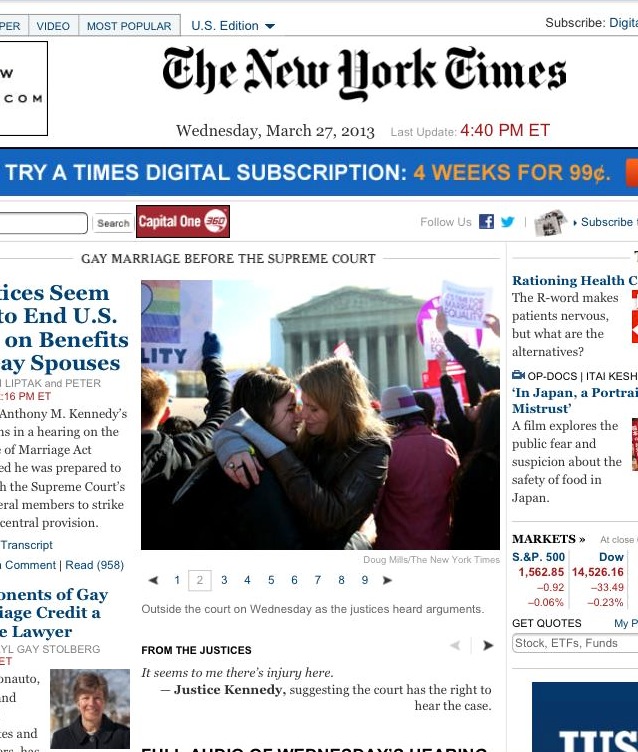 The popularity of these photos spread beyond The Hilltop, however. DeVita discussed not only the effect of these of the photographs on his Georgetown peers, but also the impact they had back at home:

My family moved right after I graduated from high school so I wasn’t out to all the people that I lived at home with, like people I went to grade school with and people who weren’t my best friends. Having [those photos] shower the Internet [means] I’m out to the world now. I don’t think there’s a single person in my life who hasn’t seen those.

When these photos were published, the four were widely publicized as Georgetown students. When asked about how they felt about the environment surrounding the LGBTQ community at the University, Waldon and Hauer-King responded:

Even though Georgetown is indeed a Jesuit university, I think it is unwise to try and necessarily associate it as a school averse to LGBTQ issues. I don’t feel my identity as a Georgetown student is at all compromised or contradictory to mine as a member of the LGBTQ community or that of the Jewish community. Georgetown was the first Catholic university to have a LGBTQ center, and I think the press is sensationalizing any aversion Georgetown would have to seeing its students campaigning for the equality of the LGBTQ community.

Brooks commented on the support he has received from, not only family and friends, but his professors:

A few reporters asked us if we felt supported by the university and we both answered yes. I even shared the photo with my theology professor and she [was very supportive when she] responded to it.

The influence of these pictures reached even beyond the United States. DeVita, having spent the fall abroad in South Africa, commented on the support he’s received from his international friends:

My friends in Holland have shared my [photos] multiple times and my friends in Thailand and South Africa have also been so proud. I feel like South Africans don’t see this as an issue because they have gay discrimination protections in the constitution. Living there for six months made me see how hypocritical it is for us to call ourselves a free country with discrimination such as DOMA.

While these four students have felt supported by the university as a whole, acceptance from all individual members of the student body is not yet evident. Furthermore, they were not looking to be immersed in these moments of Internet fame — the immediacy and power of photos in the media was enough to cause it to happen. They were not hoping to make a statement individually but rather to add their voices to the many fighting for marriage equality. They are Georgetown students who found their way onto the front page through their loving defiance.