Dear Witch Who Lives Under The Road Between Regents and Reiss,

What’s cooking? No, literally, what you are cooking down there? There’s always this unhealthy amount of steam coming from the manhole, and I get that you have to feed your family, but I just wanted to check in. I tried understanding the construction email updates, but that requires knowing what things on campus are called. Anyway, I’m 90 percent sure they are going to close down that street sometime soon. 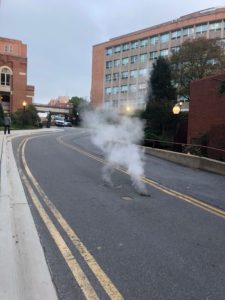 You sort of smell like a rusty harmonica mixed with whatever Florida smells like. Maybe add a little paprika? Oregano? The economy is doing pretty well right now; maybe you can move away from my early morning commute to bio. I don’t want to judge your family recipe, but I will call Child Protective Services if you’re secretly poisoning your children.

Or maybe you’re just a Vape God and enjoy hitting the juul, but instead of cool cucumber, it’s just the creme brulee pod. At least it smells just as bad. If that’s the case, though, I’m still concerned about you, because it looks like you’re addicted. You gotta take care of your pulmonary health, and being Thomas the Dank Engine all day is not a good look. And, heaven forbid you’re smoking that devil’s lettuce (not in my Christian neighborhood!!)??

Considering that you live between the sad, lonely uncle STEM building and the cool millennial mom STEM building, perhaps you’re just doing some strange science experiments. If that’s the case, there’s probably enough space for the entire biochemistry department down there. Usually when there’s a constant stream of gross-smelling, billowing gas coming out of a lab, that’s when you get help from your TA. Maybe try using the fume hood? 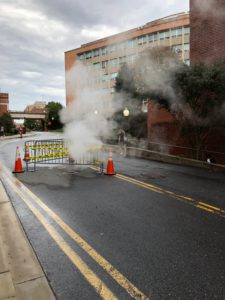 Update: I think they’re onto you: They’ve cornered you off like some biohazard, which I guess in retrospect, you could be. Whatever you do, just stay safe, witch.