For those of you who are unfamiliar with transport in India, actually for anyone, familiar or not with the concept of the auto, please let me share with you my latest fascination.

In fact, I am writing the post fresh from an auto ride. I think it may have been the closest to death I have ever been in my life and I promise you I laughed so hard I cried (subconsciously this could have been out of sheer exhaustion or terror, but we’ll go with the comical experience I chose to interpret it as).

It is 9:30pm and dark out here in Bangalore, and we were on our way back from a pub (so maybe a combination of tipsy as well). We had a bit of a hard time getting an auto driver to agree to take us to where we are staying, let alone do so for a fair price. We ended up settling on a driver who agreed to take us to Johnson Market for 100 rupees (basically the equivalent of $1.50 USD, but we were gypped nonetheless as the trek was really only worth 75 — but that’s not the point). Oh, and he was permanently cross eyed (I promise this adds important context).

Now, before I get too detailed let me explain the concept of the auto as best I can. Also known as a tuk tuk or rickshaw, an auto is basically the Indian equivalent of a taxi, at least purpose-wise. It has 3 wheels. Here they are often yellow and green. No doors, and a bench that fits up to two or three people — or sometimes even entire families — in the back. Three of us tend to fit into one very snuggly, however. They run on a meter, but more often than not (especially since we’re foreigners) they ask for double to triple what the meter would cost. Sometimes the moment we tell them where you want to go they speed away and we have to try upwards of 3 to 4 more to get one to let us in. They are our main mode of getting around this city and have, without fail, provided us with new experiences each day. 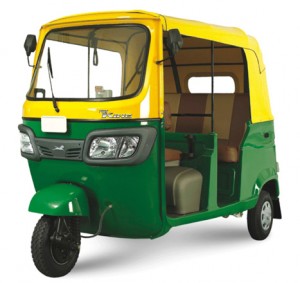 I will not be able to describe the most recent ride with justice. Imagine if you were living out a video game in real time. A roofed four wheeler weaving through the busy city streets at night going far beyond an acceptable speed, and you the helpless passenger left to cringe (or in my case laugh hysterically) in the back. If this is still seeming like a “had to be there moment”, let me at least share with you a stream of thoughts that will hopefully help you get the picture:

This is my stream of conscious everyday, multiple times a day. Here’s to making it a full week without being hit by a car, only 9 to go!