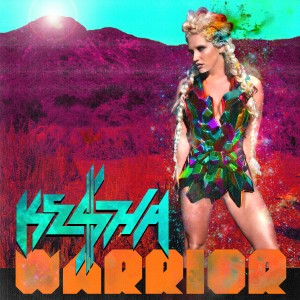 Normally, we’d leave this sort of thing to our friends at The Guide, but due to the absence of New Releases this week– obviously for other cool content, which you can find here— we’re doing a New Release Music Review of our own. And what could be better to review than Warrior, the sophomore album of our favorite glitter-glam, laser-shooting, unicorn-meets-trashcan diva, Ke$ha?

For her second full release, Ke$ha is still the sloppy and shambly pop-rockstar we know and love. Warrior is definitely not a sophomore slump; if anything, it’s just a continuation of the rindonkulous, catchy anthems that made her famous in the first place. After all, why mess with what works?

Warrior still has the infectious made-for-radio choruses of Ke$ha’s early days. (See songs Die Young, C’mon, and Out Alive for dancespiration.) It also has our girl “Ke$h” in the forms where we love her most: rap-yodeling lyrics like “Are you having fun/ With your fugly girlfriend?” in Thinking of You and glitter-rhyming “Gucci” and “coochie” in Crazy Kids.

But underneath all the fairy dust, wine coolers, and rainbows, Warrior shows something far bigger than dance-hits and brushing your teeth with liquor: maturity. No, Ke$ha’s never going to mature socially; she’s forever a rebellious lone wolf in a sparkling space desert. But Warrior shows an interesting artistic maturation: bigger and more-challenging vocals, more glam-rock, and less mindless pop. Songs like Past Lives and Wonderland demonstrate both artistry and versatility, and Ke$ha’s closest thing to– dare we say it– poignancy. But by poignancy, we mean something along the lines of a Brown House (or should I say BroHo?) DFMO.

But personally, we don’t really care, and that’s just what Ke$ha wants. Warrior is all about not caring, sticking it to the man, living in the moment, and being a rockstar. And after listening, we feel the same way. And we have a weird, insatiable urge to dance and snort pixie sticks.