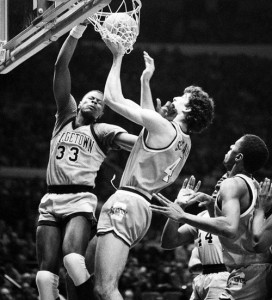 Hatred runs high for the Syracuse Orangemen among all Hoyas, past and present. This rivalry comes to a forefront each year in the Big East matchup of the two teams in men’s basketball. As we await the 7 p.m. tip-off of tonight’s highly anticipated game, alumni Katie Collins (COL ’83) speaks of the long-standing Syracuse-Georgetown rivalry during her time at Gtown:

I remember as a Georgetown freshman during the 1979-1980 season, the Hoyas had beaten some top 20 teams, including nationally-ranked Syracuse early on, yet Georgetown continued to be ranked low in the polls and much lower than Syracuse for many weeks, infuriating Hoya fans, especially students. The team still played at McDonough Gym then, Patrick Ewing would not join the team for two more seasons, but Georgetown was increasingly being recognized as an up and coming basketball contender and the newly-formed Big East made the competition between Georgetown and Syracuse all the more fierce.

The rivalry between Georgetown and Syracuse continued to escalate with Ewing’s dominance in national basketball, bringing the Hoyas to their first NCAA finals his freshman season in March 1982. The intensity became more personal when Syracuse fans threw bananas at Ewing when he was shooting from the foul line during a game in the Carrier Dome. This was captured on national television and only fueled the rivalry. Hoya student fans from those years remember attending Georgetown-Syracuse games in the Carrier Dome in which they were pummeled with oranges following a Syracuse loss.