On June 27, Georgetown celebrated Jack the Bulldog’s first birthday with the Summer Splash, allowing students, faculty, staff and alumni to enjoy free ice cream on Healy Lawn while hanging out with Jack. The lovable mascot, who turned one on June 29, played around in a pool, posed for pictures and enjoyed the company of the Georgetown community.

Students like Anthony Bugeja (SFS ’15) took advantage of the weather to play with Jack and eat ice cream.

“It was awesome getting the chance to celebrate being a part of the Georgetown community with fellow Hoyas at Jack’s birthday event; the turnout was great and the atmosphere was friendly,” Bugeja said.

The Hoya interviewed mascot caretaker McKenzie Stough (COL ’13) to learn more about Jack and his relationship with the Georgetown community.

How was the Summer Splash event on June 27?

We are thrilled that so many students, faculty, staff and neighbors took the time to come together, relax, make new friends and enjoy the summer weather on the lawn with Jack.

Jack is a very curious and social dog so this was a nice opportunity for him to make new friends from all parts of the community. Jack, like most bulldogs, gets attached to people quickly. He is always excited when his Jack Crew students pick him up for his walks or when he sees a familiar face on campus. If you couldn’t tell from the baby pool, he loves to play in water.

What events has Jack attended so far? What are his responsibilities at the event?

Jack has attended a wide variety of sports games and events throughout the spring and summer. He made his Verizon Center debut at the final men’s home game of the season versus Creighton. More recently, he cheered on graduates from all of this year’s commencement ceremonies and welcomed alumni back to the hilltop during reunion weekend.

Here’s a brief video of the event put together by Georgetown Today, featuring one of the Fourth Edition’s own, Alexis Oni-Eseleh, in the first few seconds!

So adorable. Remember when he was just a baby? 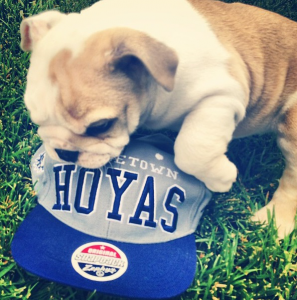 We’ve had so many great memories with Jack this year, so let’s take a trip down memory lane with some Hoya articles.

New Bulldog to Arrive Next Week

Welcome to Campus, John B. Carroll!

New Mascot Out of Limelight