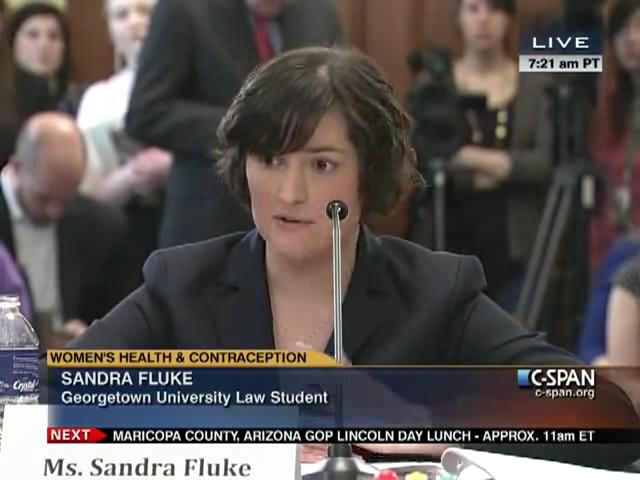 A full two weeks after Georgetown law student Sandra Fluke (LAW ’12) first entered the news as either a crusader for women’s rights or a hussy who wants the government to pay for her contraception (depending on which side of the aisle you’re on) she is still making headlines  across the country. After Rush Limbaugh hurled insults at Fluke — and all Georgetown women — at the end of February, the spotlight on the law student grew. Before Spring Break, The Hoya and 4E reported on the sudden controversy surrounding Fluke and Limbaugh’s comments, but controversy continued to swirl over the break.

In the days after Limbaugh’s Feb. 29 radio show, where he insulted Fluke and offered to pay for her contraceptives, 45 national advertisers pulled out of his radio show. Despite the exodus of advertisers, Limbaugh’s show will continue to broadcast, with Limbaugh equating the loss of advertisers to “losing a couple of French fries in the container when it’s delivered to you at the drive-through,” adding he wouldn’t notice any lost revenue as a result of the controversy. Among major advertisers that either pulled out of The Rush Limbaugh Show or affirmed “No Run policies” were Netflix, J.C. Penney and Capitol One, according to the Los Angeles Times. Among minor advertisers that withdrew connections to the show: The Girl Scouts of Oregon and Southwest Washington.

Meanwhile, Fluke continues to be a favorite target of conservative media pundits everywhere. On Friday, Bill O’Reilly of Fox News investigated whether someone else was calling the shots for Fluke, evoking ideas of a vast liberal conspiracy that used Fluke as a spokesperson for reproductive rights. On Saturday, Fox News anchor Megyn Kelly took the controversy personally, and poked fun at Fluke for playing the victim and seemingly berating her for attending a top-14 law school. Catch the video at The Washington Post.

Fluke also caught a dose of heat via Twitter from That’s So Raymond star Patricia Heaton, who last Wednesday tweeted a series of messages directed at Fluke, many of which used similar language to Limbaugh’s original insults. One tweet read, “Hey G-Town Gal: If your parents have to pay for your birth control, maybe they should get a say in who you sleep with! Instant birth control!” Heaton later deleted the tweets and apologized to Fluke via Twitter.

Yet, while all the controversy about Fluke continues, little media attention is being paid to the issue Fluke represents — the messy intersection between contraception, health care, religious freedom and government. Instead, the spotlight remains on the law student.