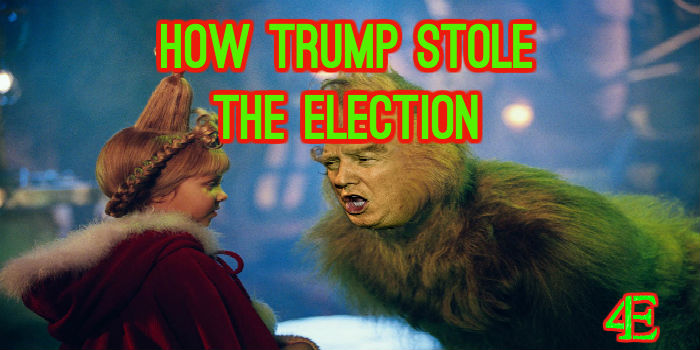 It’s that time of year again, the time when “All I Want for Christmas is You” is all we hear playing across the nation. It’s also that time when all the old-time films of our childhood, such as Rudolph the Red-Nosed Reindeer and Elf, come back on Freeform. Let’s just say it’s the most wonderful time of the year.

However, this holiday season is a bit different due to the shock that electrified the nation on November 8: Donald Trump, against all odds, won the presidency. Some Americans even refused to believe the media when the news broke.

Nevertheless, it was true: Trump turned out to be our future president. There are many reasons that explain why Trump became president, namely that many Americans refused to admit to their preferred candidate.

However, just as there were whispers of Hillary burning ballots, 4E brings you a new conspiracy theory: Donald Trump conspired to steal the election. In the holiday spirit, I will compare Trump’s campaign to Dr. Seuss’s beloved holiday story How the Grinch Stole Christmas to show how Trump accomplished this unprecedented feat.

“Every Who down in Whoville liked Christmas a lot, but the Grinch, who lived just north of Whoville, did not!” Prior to this election, many (but definitely not all) Americans were content with society. However, Donald Trump was apparently NOT. Just as the Grinch sat on the top of Mt. Crumpit, brooding about Christmas, Trump sat at the top of Trump Tower, lamenting the situation of our country. But soon, he realized not all was lost.

Trump got the idea to steal the election and ~Make America Great Again!~ Was it because his heart was three sizes too small? Biologically speaking this is humanly impossible. On the other hand, people once said it was impossible for Trump to win…

Regardless of your politics, it’s clear that this election taught us that anything can happen. So, Donald set off on a quest to steal the election. Just as the Grinch donned his Santa suit and helped Max to be his reindeer, Donald did his hair and employed Melania, Ivanka and others to help him sweep the carpet out from under Hillary’s feet. As he raced ~down the slope~ toward Election Day, Trump had a wild time of campaigning in critical areas and also bullying other candidates (Read: @JebBush, @nastywoman). Just as the Grinch made himself out to be Santa, Donald made himself out to be the one who would save our country from corruption. Interestingly, Melania also made herself out to be quite a public speaker, but we all know where that came from.

For the Grinch, Christmas Eve was the day of reckoning. Would his plan work? He proceeded to sweep all the decorations and food from the Whos’ houses and sneak out. Similarly, Trump swept through key states such as Florida, Wisconsin and Pennsylvania as Election Day progressed. However, as he continued to run away with the election, he encountered his version of Cindy Lou Who: Hillary herself. Just as all Cindy Lou wanted was presents, all Hillary wanted was to be president .

She probably didn’t personally ask Trump why he was stealing her election, but she also didn’t have to; it was all part of Trump’s scheme to make this country great again. Soon enough, he was racing back up the electoral scale until the vote was finally over. Just as the Grinch triumphantly reached the top of Mt. Crumpit, Trump emerged from the election victorious at around 2 AM the next morning. And just as Trump heard Hillary’s supporters still pledging allegiance to her, the Grinch heard the Whos’ singing voices the next day.

As we all know, the Grinch’s heart grew three sizes that day. Did Donald’s do the same? Maybe, considering he has called for unity among Americans. On the other hand, has he joined hands with Americans and sung Christmas carols? Evidently not, because the media would already have had a field day. On that note, let me leave you with one sobering thought: due to the similarities between these two stories, is it possible that Dr. Seuss actually wrote How the Grinch Stole Christmas in order to predict Trump’s election? Who knows, but like I said, anything is possible.