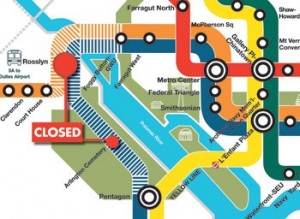 As if Georgetown didn’t have enough transportation problems, the main conduit for off-campus transportation, the Rosslyn metro station, will be closed for track work this weekend, according to a WMATA press release. The authority will replace trains with free buses between the closed station, but warns Orange and Blue Line riders that delays could reach 20-30 minutes through the construction zone.

Since a trip to Rosslyn from campus already can take up to 20 minutes, try alternate bus routes, particularly the 38B, 32/36, G2, D6 and Circulator.

For the all-important basketball game against South Florida at 11 a.m. on Saturday morning, special game day buses will run between Dupont Circle and the parking lot in front of McDonough, according to an e-mail sent to season ticket holders Thursday. Careful, though, the south entrance to the Dupont metro stop is also closed due to escalator repair.

According to WMATA, the station closure will allow workers to replace rail fasteners and remove sludge in the tunnel under the Potomac River. The rail closures are all part of a $5 billion project over five years to fix aging rail lines that can lead to problems like cracked rails, which have been found in recent weeks at Rosslyn and Tenleytown, causing delays to commuters.