This is a real first paragraph of a real majority opinion published at the close of a real D.C. Circuit of the U.S. Court of Appeals case. 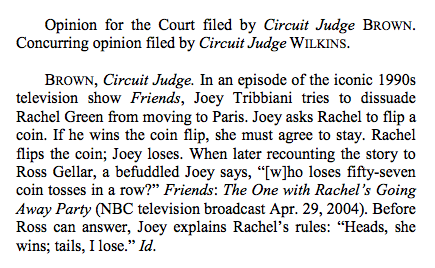 Judge Janice Rogers Brown, who penned the opinion, explains in the next paragraph how the sitcom applies to her case about a D.C. school director’s fraud and the federal government’s seizure of school property. Apparently, the Fed excluded the SunRise academy from the director’s criminal case saying that it could appeal for its property in a third party forfeiture proceeding. When SunRise tried this, the federal government said SunRise was barred because of information that was exposed in the criminal case they were excluded from.

Brown seems to think that Rachel’s coin toss was #notcool and neither was the federal government’s decision.

Whatever, Rachel. You know that coin toss was lame.

The moral of this story is that you should stop studying and get on with Season Ten, Episode 5, “The One Where Rachel’s Babysitter Babysits,” because Friends knowledge is more important than Econ Stat knowledge.